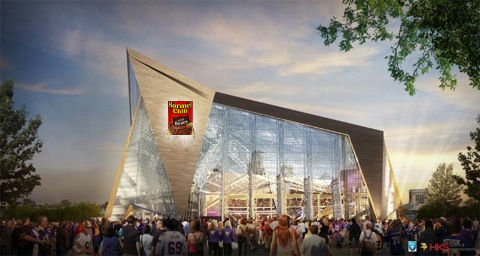 Why yes, we do think this is a metaphor for the Minnesota Vikings as a team, organization and fan base.

About 30 percent of the exterior panels of (The Hormel Chili Dome) must be removed to fix water damage linked to leaks in the snow gutter system. The damage will cost about $3 million to $4 million, which will be covered by the stadium contractors and designers.

These assholes should have hired from Wisconsin.

Lambeau Field has been renovated numerous times and has had no such problems. Do you know why?

Yes, the geniuses responsible for this debacle are Mortensen Construction, headquartered right there in the giant dollop of shit known as Minneapolis.

John Wood of Mortenson showing us where US Bank Stadium water leaks are – on outside panels of snow gutters. pic.twitter.com/6vfnOcVBjk

Brian Angelichio Knows What He Has in Richard Rodgers