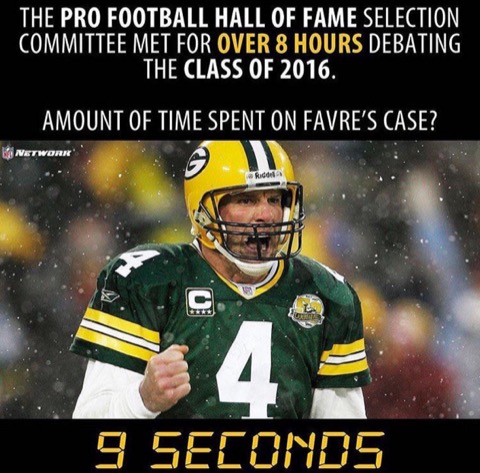 Just how much of a shoo-in was he?

Each candidate is presented to the selection committee by a local journalist who covered that player and then debate ensues. Favre didn’t really have to be presented at all and there was obviously no debate about his election.

Depending on who you ask, the whole process lasted either six or nine seconds.

The longest discussion of the HOF meeting was Eddie DeBartolo Jr. at 50 minutes, 33 seconds. The shortest? Brett Favre at six seconds.

.@wyche89 reports that the Brett Favre introduction to Hall of Fame voters was 9 seconds. I mean… What do you really need to say?

Favre’s election was a no-brainer, as it should have been.

Favre was presented by the Green Bay Press-Gazette’s Pete Dougherty, who gave this account of his presentation.

In talking about another candidate, (Jason) Cole said he’d consulted 199 NFL people at the Senior Bowl and asked them to pick the five players they’d put in the Hall from the list of 15 modern-day candidates. All 199 picked Favre.

So when Favre’s turn came in the meeting, I told the committee I had a presentation ready but let’s just skip it and go with what Jason Cole said. David Baker, the Hall’s president and executive director, said, “I take it that’s the final word?” I said yes, the committee cheered and we moved on to Kurt Warner.

It isn’t likely that this has happened with many Hall of Fame candidates before and it’s unlikely that it will happen with many in the future.

There aren’t many guys who have or will put together a career on par with Brett Favre’s though.