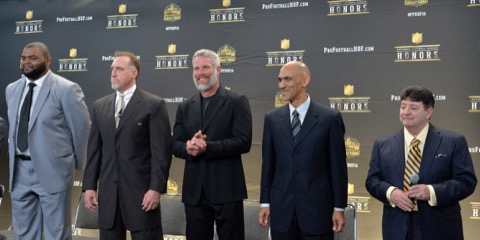 Former Green Bay Packers quarterback Brett Favre got himself a spot in the 2016 Pro Football Hall of Fame class Saturday night. While everyone knew that was coming, Favre still expressed disbelief after the announcement.

He made these comments to ESPN.

“I think it’s going to take a while for it to sink in. I’ve done a few interviews and had a little bit of a chance to kind of digest and what I’ll say now is probably what I’ll say for quite a while. I totally get that I’m in the Hall of Fame, but I don’t necessarily accept it. What I mean by that is, after we were introduced on stage here at the Honors, the Hall of Famers past come up and say their congratulations — and there were so many, some I know, some I know of but haven’t met. Like, for example, Roger Staubach was my hero. He was my idol. I wanted to be Roger Staubach and he knows that because I’ve told him that before. I’m in an elite club with him now. I guess from the outside looking in, I am equal to him, but I will never feel that way. I feel like I’m on borrowed time. Maybe that’s odd for people to hear or maybe there are others that feel the same way. Don’t get me wrong, I could not be more thankful for this. I mean, really, NFL Hall of Fame for a little country boy from south Mississippi who ran the wishbone? Anything can happen, but again, I just can’t believe I am amongst the guys I emulated and hoped to be someday.”

I think we’ll just leave it at that.