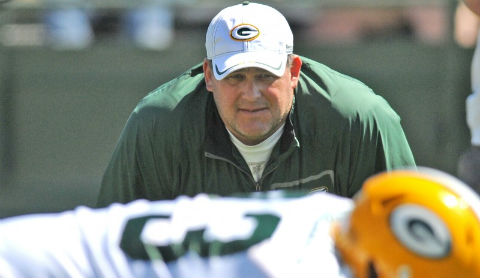 Neither of those units met the Packers’ expectations in 2015 and, probably more importantly, there were better coaches available for the Packers to hire.

On the first point, you know about the struggles. Eddie Lacy never got it going and was disinterested and unmotivated most of the season, finishing with a career-low 717 yards. At tight end, the Packers didn’t exactly have a wealth of talent, but their top guy, Richard Rodgers, averaged a pathetic 8.8 yards per reception.

That brings us to Packers offensive line coach James Campen, who has held that position with the team since 2007, and this question.

When will the Packers hold Campen accountable?

In 2014, the Packers had one of their best offensive lines under Mike McCarthy. Many said it was their best.

They regressed and were one of the weaknesses of the team, perhaps second only to the wide receiver position.

So Campen certainly met the first criteria for getting fired. What about the second?

Solari joined the Packers after Jim Harbaugh was dismissed in San Francisco, but he coached some of the best lines in the business when he was with the 49ers.

If you’re wondering why we’re using the past tense when speaking of Solari, it’s because he will reportedly be named the offensive line coach of the New York Giants. Or he already has been — that’s not quite clear.

If Solari still happens to be in town, then the Packers would be wise to keep him there.

I mean, if we’re holding assistant coaches responsible for underperforming units, then Campen has to go just like Gash and Fontenot did.