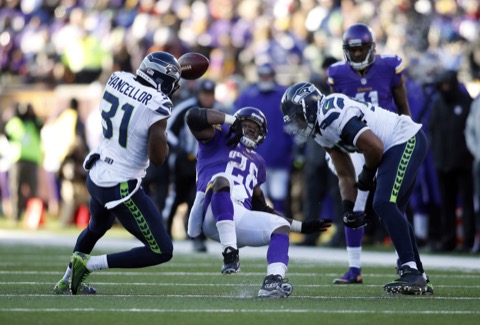 Hey, it’s not hard to make Minnesota Vikings fans look stupid. They usually do that all on their own, but this moron right here got completely obliterated earlier this week.

On Monday, this tool called into Colin Cowherd’s show and tried to tell Cowherd that the Seahawks just got lucky in beating the Vikings a day earlier.

Well, Colin was having none of that nonsense.

It starts with Vikings fan Adam saying, “Yeah, I just want to say you’re nuts if you don’t think Seattle got lucky there. Our defense had them crushed.”

And by the way, that’s completely typical Vikings fan bravado.

“We’ve got the greatest team ever! We just somehow have never won anything, but we’re still the greatest!”

Anyway, Cowherd destroys this moron. Here are just a few of the choice tidbits, my favorite being this first one.

That pretty much sums up what I’ve felt every time any mouth-breathing, Hormel chili-stained asshole Vikings fan has ever opened their mouth.

After that, Colin started talking about the game.

“You averaged two yards per rush with Adrian Peterson at home in a weather condition that favors you. Seattle averaged double that with their fourth-string running back.”

“You lost because you have a second-tier quarterback. You don’t have a quarterback who can make a play. You couldn’t score a touchdown. You’re a fanboy. Four hours of football, you couldn’t, at home with a weather advantage, score a single touchdown. That’s why you lost.”

Oh man, is it glorious!