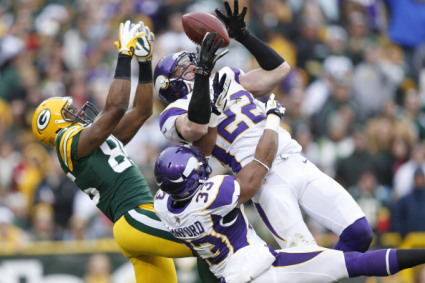 Let me make something completely clear at the start. I am a lifelong Packer fan. I don’t like the Minnesota Vikings. I am going to refrain from using the word hate, as I feel that is a strong word to use about an NFL team. I am going to save that word for the people who deserve it – child predators, rapists and cable customer service. However, I still want to be clear that I strenuously dislike the Minnesota Vikings.

What I most of all despise about the Vikings is that they are POSERS. They act like they are in the class of the Packers just because we play in the same division. They are not. We may dislike the Bears, but we respect the Bears. They have won 9 NFL Championships. They have the most franchise wins in NFL history and the most players in the NFL Hall of Fame. The Bears may suck, but they are a true rival to the Packers. The Vikings are not. They are pretenders.

So, with that being established, it should be clear that I hope the Vikings never get to where they want to go. I would be delighted if they forever remained a doormat, beneath our notice. However, there is a good reason why it appears they, unfortunately, may not.

When the Packers rolled through the playoffs in 2010, before ripping off 13 more straight wins in 2011, the impact it had on their rivals was obvious. The two teams that had been the 1 and 2 seeds that year- Atlanta and Chicago- both began to build offenses that resembled the Packers. The Falcons traded up to draft Julio Jones to line up across from Roddy White, and the Bears traded for Brandon Marshall and then drafted Alshon Jeffrey. Both also went to a more uptempo style of offense.

Both plans were doomed to fail from the beginning. What had made the Bears a threat during Lovie Smith’s tenure was their defense. What had made the Falcons a 13-3 team once upon a time was their ability to run the football and control the clock. Both teams lost themselves in a quest to copy the Packers, or you could add, to copy the Saints, who won the Super Bowl the previous year.

The inherent problem with both teams was that Matt Ryan and Jay Cutler were not Aaron Rodgers and putting all the talent around them in the world wasn’t going to change that. Even if both teams built rosters that were capable of competing in a shootout with the Packers, ultimately such games are determined by turnovers, and there the Packers would always have the advantage.

The Detroit Lions had a chance to overtake the Packers last season thanks to their ability to play defense. However, though they had developed the defense they needed, the Lions had still committed too many resources to their passing attack. Unable to run the football in December, the Lions couldn’t get by the Packers at Lambeau Field in Week 17, and the Packers did enough to earn their fourth straight division title.

The Vikings, however, have improved upon the Lions’ model. Their drafting strategy the last couple seasons has been plain – build the defense and offensive line. If you can stop the Packers and run the football, you will beat the Packers. And if you can do those two things consistently, you can play in any weather, any stadium, and at any time.

With high picks Harrison Smith, Anthony Barr and Xavier Rhodes all appearing to be difference makers on defense, the Vikings are well-positioned to field the best defense in the division in the coming years. The only question is whether Teddy Bridgewater and offensive play-makers like Stefon Diggs can become good enough to get the Vikings over the hump within the window that an aging Adrian Peterson provides them.

If the Vikings can find an effective replacement for Peterson in a couple seasons, they can become the long-term thorn in the Packers’ side that they hope to, and possibly look to close the Packers’ window with Aaron Rodgers.

The NFL is a long-term war of attrition with they who draft best ultimately wearing the crown. The Vikings have the formula to beat the Packers. Now we’ll see if they drafted the talent.