Packers Set Mark for Failure in Loss to Vikings 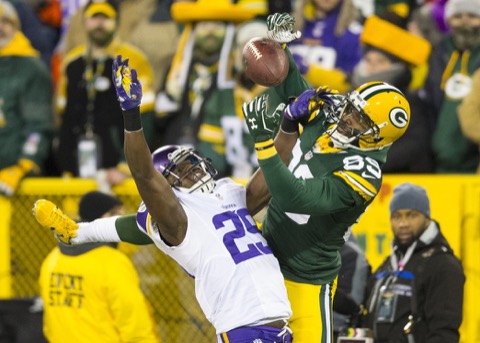 The NFC North has a new champion and it’s the scumbag Minnesota Vikings. You might as well go ahead and thank Green Bay Packers quarterback Aaron Rodgers for that.

The Packers had a chance to tie after scoring 10 unanswered points to pull within seven after falling behind 20-3. This came after getting a gift, when kicker Mason Crosby stripped Vikings’ return man Cordarrelle Patterson on the kickoff following the Packers’ final score.

Rodgers promptly drove the Packers to Vikings’ 13, where he faced fourth down and goal. After wasting a timeout, Rodgers threw a limp, lifeless pass toward James Jones in the corner of the end zone that was easily intercepted by Xavier Rhodes.

The defense would force a three and out and Rodgers would get the ball again with a little over a minute, but it didn’t matter.

After the usual offensive bumbling around, a Hail Mary on the last play fell harmlessly to the ground.

It was the same story we’ve seen replayed over and over during the second half of the season.

Defense plays well — and they were nearly dominant on this day — offense is a flaming pile of shit.

So here’s the Packers defense holding the Vikings to a net 91 yards passing and Adrian Peterson to 67 rushing yards and 3.5 yards per carry.

If you just saw those stats you’d be ecstatic because, clearly, the Packers won this game. Probably in dominant fashion.

But as with any equation, you have to factor in all the variables.

And the biggest variable for the Packers this season has been an offense that is literally awful. It doesn’t matter who’s calling the plays, although neither of the Packers’ play callers have adjusted appropriately to the personnel they actually have on the field.

It really comes down to Rodgers. He can no longer make the throws. Even when his receivers are making plays — which they actually did on Sunday night — it doesn’t matter.

Rodgers just doesn’t have it. The accuracy is gone and so is the decision-making.

On this night, James Jones had over 100 yards receiving, Richard Rodgers had seven for 59 and a touchdown and even Davante Adams had four for 54.

More importantly, those three guys did something they didn’t do all season (or did very, very rarely). They broke tackles and got yards after the catch.

Rodgers ho hum night coupled with a running game that couldn’t find its stride (26 rushes for 76 yards) doomed the Packers.

I talked about pride before the game.

The Packers defense — Clay Matthews, in particular — had some. The Packers’ much-maligned receivers had some.

They showed up. They played their asses off.

Rodgers didn’t have any pride.

It looked like he could have given two shits.

And because of that, the Packers turn the division over to the Vikings and, for the first time in NFC North history, get swept by the division at home.

The epitome of failure right there. Losing to the Vikings, Bears and Lions in the same season at Lambeau Field.

A fitting conclusion to a debacle of a season.

We get to watch the Packers lose to Washington next weekend.

That will be super!

Previous Article
Just in Time, Ragnar is a Packers Fan
Next Article
Five More Thoughts on Packers’ 20-13 Loss to Vikings