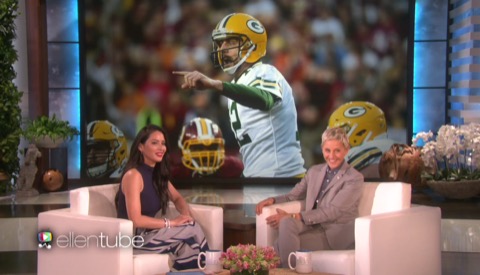 Oh boy, is she milking this thing.

Remember that rumor that Aaron Rodgers and Olivia Munn were in engaged? Well, we didn’t believe it and it was quickly shot down as false, but Munn is STILL talking about it.

She was on Ellen on Tuesday and that’s how they led off her segment.

Frankly, we are now beginning to suspect it was Munn who planted the engagement story to begin with.

Munn has been making the talk show rounds to promote Ride Along 2. She obviously knew beforehand that she’d be making these rounds and needed something to talk about. It’s not as if these talk show interviews aren’t scripted to some degree.

Either the host or some lackey will ask the talent what they want to talk about before the show.

In Munn’s case, she’s obviously telling everyone, “Let’s talk about my pretend engagement.” You can tell because that topic has come up during the majority of, if not all, of her promotional appearances.

Here it is again.