by Monty McMahon
in Uncategorized
122 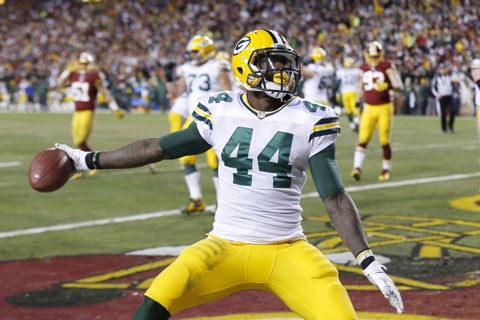 A season’s worth of Green Bay Packers’ shortcomings went out the window on Sunday in a 35-18 win over the Washington Redskins.

They said the previous 16 games no longer mattered, they tried to make us all believe this was the week things would be different and then they came out and finally delivered.

This was the complete performance we’ve been looking for from the Green Bay Packers since they demolished Kansas City in week 3.

The defense delivered their typical solid performance. On this day they had six sacks, a fumble recovery and held Washington scoreless after a touchdown with 9:41 left in the third.

That defensive effort also included holding the Redskins to 1-for-4 in the red zone and 1-for-4 on fourth down.

They stepped up when it mattered most.

It was the offense that made the difference, though.

Rodgers made the plays when he had to make the plays, going 21-of-36 for 210 yards, two touchdowns and no interceptions.

Quite tellingly, we got a fiery Aaron Rodgers on this day. Not the dead-eyed, don’t-give-a-crap Aaron Rodgers we’ve seen since the Hail Mary in Detroit.

That translated to the rest of the offense.

The Packers ran up 142 yards and two touchdowns on the ground, splitting the load between Eddie Lacy (63), James Starks (53) and Randall Cobb (24).

The receiving load was spread around between James Jones (81), Davante Adams (48) and Cobb (38), with Adams and Cobb turning in the two scores.

Most impressively, the offensive line held up with backup center J.C. Tretter playing left tackle in place of the injured David Bakhtiari. Rodgers was sacked just once after absorbing 13 sacks in the two previous games.

That was the biggest difference on the day.

If the offensive line can give Rodgers time, Rodgers maintains his edge and the defense just remains at its current level, then the Packers have a chance.

We’re not going to get ahead of ourselves, though. We’re just going to savor a playoff win for the moment.