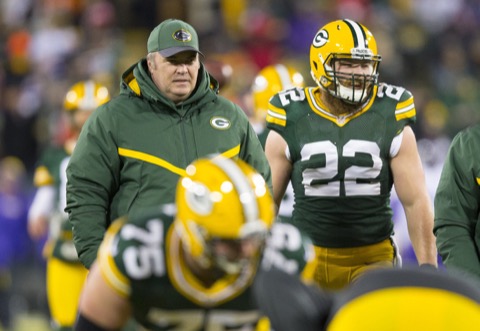 And why would it?! It’s been so successful this season!

Mike McCarthy’s post-game message was similar to what it’s been all season, after the Green Bay Packers lost to the Minnesota Vikings.

We’ve got to execute.

Essentially, McCarthy is refusing to alter his scheme and he’s laying the responsibility for the Packers’ offensive shortcomings at the feet of the players, who aren’t executing.

“We believe in our football team and as a coaching staff, we’ve got to make sure we’re ready to go.”

This is so frustrating because it’s square peg and round hole stuff.

The Packers don’t have the personnel to execute McCarthy’s preferred scheme, which depends on receivers to beat one-on-one coverage. They haven’t had that since Jordy Nelson went down, as evidenced by their lack of a deep passing attack this season.

And yet, the formula isn’t going to change.

So what needs to happen? Well, the players just need to execute.

Except the players on this team cannot execute this scheme. They’re just not capable.

That doesn’t mean they’re all bad players — some of them are. It just means they’re the wrong players for this scheme or they’re being asked to do the wrong things.

So what’s the result?

A lot of failure and a lot of very subtle finger pointing.

We’re going in circles here guys. Do you know where that circle leads?

Down that hole in the bottom of your toilet.