Let’s Pretend the Packers Beat Washington for a Moment… 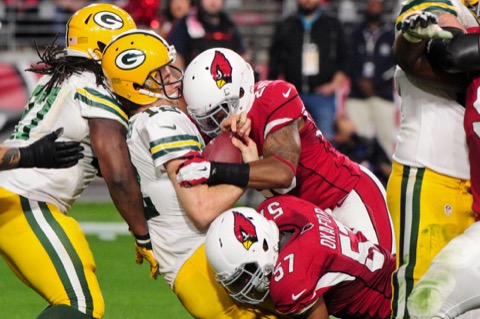 We can pretty much all agree that this Green Bay Packers team is not capable of making a Super Bowl run, but let’s pretend!

The Packers will travel to Washington to face the Redskins this weekend. Washington was the NFC East champion and finished the season 9-7.

For a large part of the season, they weren’t very good. However, they won four games in a row down the stretch, with three of those wins coming on the road. They certainly look like the better football team right now.

At any rate, let’s say the Packers get a win, here’s what’s likely to play out.

The Seattle Seahawks play at Minnesota. We’re going to go ahead and assume that’s a Seahawks’ win, in which case the No. 5 (Packers) and No. 6 seed (Seahawks) would remain.

Seattle would travel to Carolina, the No. 1 seed, and the Packers would head right back to Arizona, where they got demolished two weeks ago.

IF the Packers beat Washington, we see no way they’re getting by the Cardinals, but let’s say the entire Arizona team dies in a plane crash prior to the game.

That would leave the Packers with either another trip to Carolina, where they lost by eight earlier this season, or another home game with Seattle, who they beat by 10 in week 2, when they still knew how to play football.

It should be noted that much has changed throughout the year.

Carolina went to Seattle and won 27-23 in week 5, but the Seahawks seemingly didn’t start playing football until the second half of the season. Similarly, the wheels hadn’t fallen off for the Packers just yet when they went to Carolina and lost in week 8.

Carolina is pretty much the same team they’ve been all season, but Seattle is much improved and the Packers are much worse.

But this our fantasyland and we’re saying the Seahawks beat the Panthers.

Now, come back to reality and realize that if the Packers somehow get by Washington, they’re most likely going to get trounced in the divisional round.