Jordy Nelson Says He’ll Be Back for Training Camp 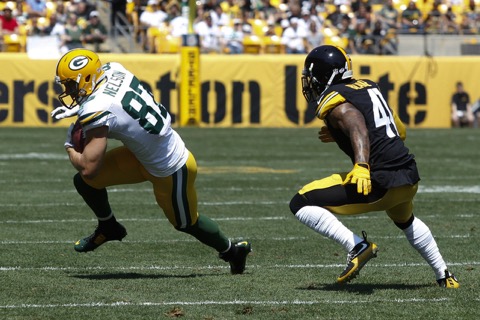 Training camp sure seems a long way away right now, but if you’d like some good news for a change, it’s that Jordy Nelson should be a full participant when it finally does roll around.

Nelson says he’s on schedule in his return from the torn ACL he suffered in the Green Bay Packers’ second preseason game. He has suggested that he’d like to participate in OTAs in some fashion, but will most certainly be ready for camp.

“The knee feels great,” Nelson said. “It’s right on the path where we want to be, if not ahead. We’re doing everything we can do right now and just waiting for different timetables, continuing to move forward. But we’re right where we need to be, and we look forward to getting back to practice and training camp.

“Now, how much I’m going to be doing (during OTAs) is up to everyone else, probably. We’ll find a nice medium between all of us, but we’ll definitely be ready for training camp and on.”

Nelson will have some rust to work off whenever he returns. He hasn’t been running at full speed yet and hasn’t been allowed to make cuts at all.

And as we’ve seen with many players with torn ACLs in the past, it also usually takes guys time to regain confidence in their bodies.

Hopefully for the Packers’ sake, all of that takes no more than four preseason games.