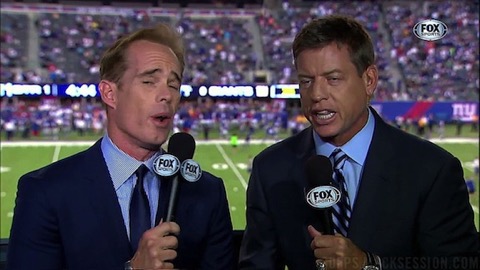 Many of you harbor an irrational hatred of Fox’s No. 1 broadcast team of Joe Buck and Troy Aikman.

A hatred of Aikman we can maybe understand. He played for the Dallas Cowboys in the 1990s, when they largely owned the Green Bay Packers. He also doesn’t know how to properly pronounce Green Bay, incessantly putting the emphasis on the wrong word, which is annoying as fuck.

But Buck, we’re not really sure what he’s done.

Some Packers fans apparently think he doesn’t like the Packers and thus, the reason for the hatred.

This fact is not lost on Joe Buck, as he demonstrated on Tuesday.

While watching Making of a Murder on Netflix can't help but wonder how many Averys mistakenly think I don't like the Packers.

If you’re unaware of what that reference is about, Making of Murderer focuses on a man named Steven Avery, who is from Manitowoc, Wisconsin.

Since he’s from Wisconsin, his family must be Packers fans and thus, must hate Joe Buck.

GIVE BUCK A CHANCE, I SAY!

And you can go ahead and do that this weekend because he and our old pal Aikman will be calling the Packers’ game at Washington.