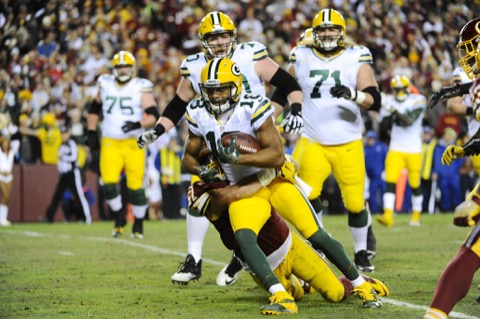 Well, that was a nice change of pace, wasn’t it? The Green Bay Packers play some inspired football and actually get themselves a dominant win.

The guys have to be feeling good after this one. Now we’ll see if that will transfer to Arizona, where the Packers got manhandled back in week 16.

We’re not quite ready to get onto that yet, though.

First, here are five things that stuck out in the win over Washington.

Gotta give it up to J.C. Tretter
Filling in for the injured David Bakhtiari at left tackle, backup center J.C. Tretter was bulled back into Aaron Rodgers in the first quarter. The resulting sack was the safety that put Washington on the board and we all assumed, “Here we go again.”

Well, Buffoon actually gave Tretter some help — or at least pretended like he was going to give Tretter some help — by lining tight end Richard Rodgers up on the left side moving forward. Mostly, Tretter just held up fine from then on. The Packers only gave up one sack on the day and that was a huge difference.

Let’s not get confused. We won’t be labeling Tretter a left tackle, but we noticed him less than we notice Bakhtiari getting shoved around on a normal afternoon.

Alright, Davante
We’re not ready to suggest Davante Adams is even a serviceable NFL wideout, but he’s put together two games in a row where he was actually semi-impressive. We noticed Adams fighting for extra yards against Minnesota in week 17. We noticed him doing the same against Washington.

Adams finished with four catches for 48 yards and a touchdown. Probably just as important, those four catches came in four targets. So no drops and no flailing, unathletic attempts to try to catch balls.

Part of it has to be that the Packers are using Adams somewhat differently. They’re not asking him to make plays on the ball or run crisp deep routes — two things he’s terrible at. They’re primarily just getting him the ball in space and asking him to try to run through some tackles, which he’s not bad at.

Maybe they’re finally figuring this Cobb thing out too
When Buffoon took back the play calling, it immediately became clear that he wanted to make Randall Cobb the focal point of the offense. Of course, it’s hard to do that when he only gets the ball three or four times a game, as has been the case with Cobb in the last four games or so.

Cobb didn’t put up huge stats, but he was a difference-maker on Sunday on the eight touches he had (five rushes for 24, three catches for 38 and a touchdown). Cobb got tough yards on the ground and made important receptions.

Expect more of that going forward, however far forward is.

Reed torched the Packers for nine receptions, 120 yards and a touchdown. The Packers put defensive back Micah Hyde on Reed most of the time. Frankly, Reed is just bigger and more athletic than Hyde and you saw the results.

The other option the Packers have in situations like this is undesirable for another reason. It would be to use Clay Matthews to cover the tight end. That takes him away from the line of scrimmage, which forces other guys to make plays there.

The Packers don’t have to worry about this in Arizona, but if they beat the Cards, they’ll likely get the Panthers’ Greg Olsen. They fared well against Olsen during the regular season, but after seeing Reed go off, he’ll likely to be featured more in a rematch.

This was one game, though. And it was a typical win for the Packers.

Washington wasn’t an upper echelon team. They won the worst division in the NFC. These are the kinds of teams the Packers always beat, so it was no surprise to us they beat this particular foe on Sunday.

It was nice to see the offense working again and that’s the primary reason we’re not as down on the team as we were for much of the season. Does that put them on the same level as the Arizona Cardinals?

No, it does not. The regular season is over, yes. But this Packers team just got their asses handed to them in Arizona by 30 points three weeks ago. So let’s not start punching anyone’s ticket to the Super Bowl just yet.

“Cautious optimism” is the phrase of the day.