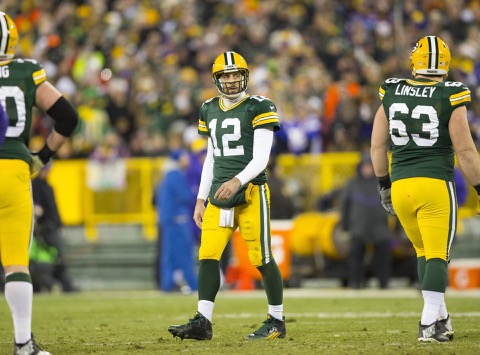 It was anticlimactic, really.

Despite my speech about pride earlier in the day, we all knew it was going to play out like this. The Green Bay Packers — despite a great effort by their defense — just aren’t very good. There’s something more deep-seeded that’s wrong with this team, beyond personnel, beyond play calling, beyond the surface.

We’ll get into that another time, like after the Packers lose to Washington next week.

Sunday night, we laid the majority of the blame on Aaron Rodgers, when his bad season came to its fitting conclusion.

And now the Minnesota Vikings are NFC North champs. The Packers certainly didn’t deserve that title.

What is Mike McCarthy going to do now when someone suggests his team sucks? Prior to Sunday night he could still get all huffy and reply curtly, “We’ve still got the division title in sight. That was our No. 1 goal!”

What’s your goal now, Buffoon? Just going to turn it on for the playoffs, huh?

Like so many bad teams who backed into the playoffs before you. Just flip the switch and viola! You’re good! Just in time for the playoffs!

Josh Sitton is no left tackle
The Packers moved left guard Josh Sitton to left tackle for this game because David Bakhtiari missed his second consecutive contest with an ankle injury. After Don Barclay failed at the position last week and Josh Walker proved he doesn’t even belong in the NFL while player right tackle, Sitton may have been the best of a number of bad options. Now, he wasn’t totally horrible, but having never played left tackle before, Sitton certainly had some issues with the edge rush of Everson Griffen.

Griffen had three tackles for loss, including two sacks. Just as important, he disrupted the Packers passing game all night. Rodgers was constantly expecting the rush from his back side and fairly often, he’d step up or out of the pocket before he needed to. There was obviously no confidence in Sitton from the guy who needs to have confidence in his left tackle.

Now, it had been suggested that J.C. Tretter might have been a better option. He’s listed as a center, but has also played guard this season and he played left tackle in college. Plus, he’s the Packers’ most athletic lineman. Tretter has played well at center in relief of Corey Linsley. Some believe he’s even played better than Linsley and you’d get no argument from us on that front. That doesn’t make him a left tackle, but just because a guy is a good guard doesn’t make him a left tackle either.

Ultimately, this is a failure by the personnel people and the coaching staff. They clearly misjudged the talent they had and didn’t equip themselves with a capable backup tackle. And so this is what you get. They should solve that problem by drafting a left tackle to replace Bakhtiari this offseason. He’s a subpar starter, but would be a capable backup.

With the turnovers being equal, clearly the Packers won that game! Except, laughably, the offense found other ways to bungle things. And it was the usual shit.

The Packers went 1-for-4 in the red zone, 2-of-15 on third down and 3-of-6 on fourth down. The Vikings weren’t markedly better in those areas, but they were better.

Those three things made everything else moot.

Another dud by Cobb
The Green Bay Packers should get their money back. They paid Randall Cobb like a No. 1 receiver last offseason and then when they actually needed him to be a No. 1 receiver, he shit the bed. Cobb hauled in six passes for 37 yards on Sunday night, giving him a season total of 79 receptions, 829 yards and six touchdowns in 16 games.

His 10.5 yards per reception was a career low. His six touchdowns were just two more than he had in 2013, when he played in only six games.

You know who led the Packers in receiving yards this season?

James Fucking Jones, who was cut by two teams in the past year and was playing on a one-year, minimum deal.

Why don’t the Packers find ways to get these guys open?
The Vikings were up tight on the Packers receivers most of the evening and the Packers obviously weren’t going to blow by that coverage with their reservoirs of speed. So what do you do?

You do what we were bitching about the Packers not doing earlier this season. Bunch formations, pick plays, crossing routes and so forth. The Packers used those things for about two seconds under Tom Clements and then, for some reason, they disappeared. Since Buffoon has taken over as the play caller, you see none of that stuff, with the exception of Randall Cobb occasionally lining up in the backfield to create a mismatch.

You know, because we’re the Green Bay Packers and we run offense only this one way, regardless of personnel!

Back to the drawing board
Anyone who thinks this season is going to continue for the Green Bay Packers for much longer either hasn’t been watching them play or doesn’t know much about football. This team is a disaster, from its construct on up.

There’s not one thing that can be corrected that will result in the Packers returning to winning football. The Denver Broncos exposed this team in week 8 and every other team has used that information to game plan accordingly (except, for some reason, the Vikings in Minnesota).

The Packers don’t have the personnel to do what they want to do offensively. They won’t deviate from that shitty offensive plan. The return of David Bakhtiari or Sam Shields isn’t going to right this ship and if you think otherwise, you’re just wrong.

Previous Article
Packers Set Mark for Failure in Loss to Vikings
Next Article
McCarthy: The Formula Isn’t Going to Change