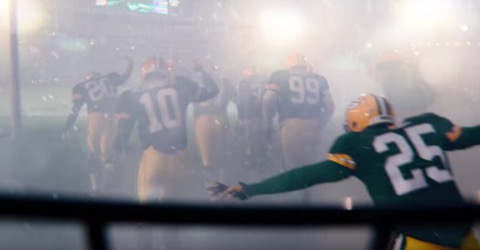 We’re sure there are going to be new spots featuring Aaron Rodgers — probably State Farm — and Clay Matthews — likely DiGiorno. However, we haven’t seen those yet.

Here’s what we do know.

The NFL is producing a Super Bowl commercial for the 50th anniversary of the game and it will feature six Packers fans. From what we gather, they’ll be singing Seal’s Kiss From a Rose, but the overall premise of the spot is being kept under wraps.

The other one comes from Campbell’s and is a spot for Chunky Soup. It’s called This One’s for Mom because, basically, the two things that get you to the NFL are mom and Chunky Soup.

How are the Packers involved?

Well, this player, who is actually you (yes, you!), ends up living every boy’s dream and playing for the Green Bay Packers.