Carson Palmer is Totally Going Down! 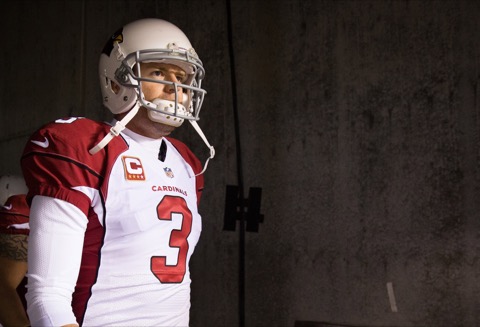 Well, someone has given us a gem about Arizona Cardinals quarterback Carson Palmer.

Carson Pamer is only QB left in playoffs never to have won a playoff game. He torched Packers for 238 yards in 1H of 38-8 Week 16 Cards win.

Here’s the thing about that stat right there.

Carson Palmer has played in just two playoff games in his entire career.

How can that be, you say?

Well, not quite, but he has been in the league for a while. Twelve years, to be exact.

He spent seven of those years with the Cincinnati Buttholes, two with the Oakland Raiders and now three with the Cardinals. So that should answer your inquiry right there.

Palmer’s previous two playoff contests were following the 2005 and 2009 seasons, both with Cincinnati.

In the first, Palmer completed his only pass before getting knocked from the game with a busted knee. That turned into a 31-17 Steelers’ win. In the second, he went 18-of-36 for 146 yards, one touchdown and one interception. That was a 24-14 Jets’ win.

So you want another true, but completely misleading statement?

Statistically true, but based on just a one-game sample size.

You’re here looking for a positive for the Green Bay Packers, though. Well, despite being around since ’87, Palmer is still an inexperienced playoff quarterback.

In fact, even though he’s four years younger, Packers quarterback Aaron Rodgers has played in 11 more playoff games than Palmer has.

So there you go.