Cardinals Get Some Help, Beat Packers

by Monty McMahon
in Uncategorized
144 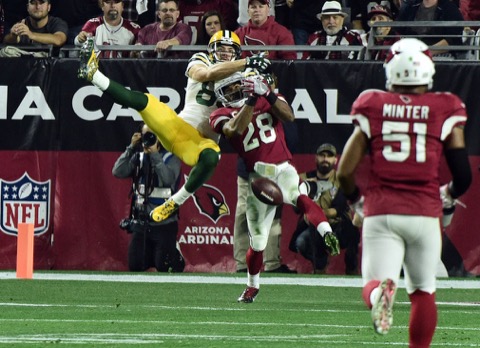 If we wouldn’t be accused of sour grapes, we’d have sworn someone wanted to hand that game to the Arizona Cardinals…

It’s almost as if Clay Matthews or Julie “White Shoes” Peppers was being held on every play there in the last four minutes on or we have no idea what constitutes holding. Oh, not both of them! Just one of them on at least, I don’t know… just about EVERY FUCKING PLAY!

But hey, the Green Bay Packers played their part.

They fought the valiant effort and came up short. And that allowed the Arizona Cardinals, the team the NFL wanted to move on, to move on.

The Packers had their chances.

I mean, they had to turn every opportunity into pure gold the way this game was called, but they had their chances.

We all knew the Packers wouldn’t get beat down like they did the last time in the desert. They rattled Carson Palmer, who, despite getting his first playoff win is obviously still a second-rate quarterback. They shut down the Cardinals’ running game (19 carries, 40 yards). They won the turnover battle (2-1).

And that’s the thing.

The Packers didn’t really do anything to lose this game, other than to lose it.

The difference was those eight penalties for 55 yards. And then the penalties that were obvious that weren’t called… on the Cardinals.

So let’s say the Packers were penalized as they were deserved. The fact of the matter is, the Cardinals weren’t.

But hey, someone wants them to go the NFC Championship, and that’s where they’re going.

So let’s pretend everything was equal here.

And let’s pretend the Packers didn’t get fucked…