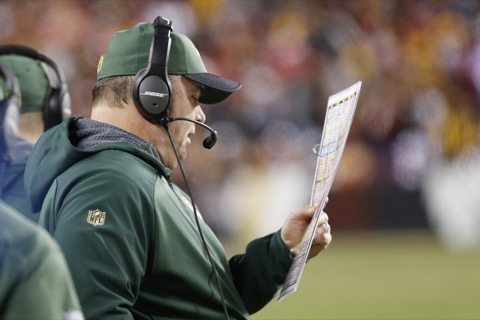 I really like that analogy there. Mostly because Green Bay Packers coach Mike McCarthy is a fat bastard and I can totally picture him as a pig, rolling around in some shit.

But the larger point here is, Big Mike must be pretty happy with himself today.

That was pretty evident when he took the opportunity to stick it to the media following Sunday’s Wild Card win.

“That’s the way you want to play offense,” McCarthy said. “When you get in the playoffs, you don’t have to talk about the regular season anymore. I don’t know if you guys got the memo about that. It’s the way you need to play, and we’re going to have to play that way moving forward.”

And yes, we’ll hand it to that rotund sonofabitch. His offense played pretty well on Sunday, marking the first time the Packers offense has looked formidable since early in the season.

The Packers mixed it up against Washington, not trying to rely on one guy to carry the load, but spreading the wealth.

Eddie Lacy and James Starks both rushed for over 50 yards on a 141-yard rushing day. Seven guys caught a pass on a 210-yard passing day.

Aaron Rodgers was only sacked once, as the Packers moved quickly from play to play and kept the Redskins defense on their heels.

This was similar to the McCarthy offense we saw last season.

We can only hope, but Sunday was a good sign.

Mike McCarthy and Aaron Rodgers Are All Good Now!

Mike McCarthy and Aaron Rodgers Are All Good Now!