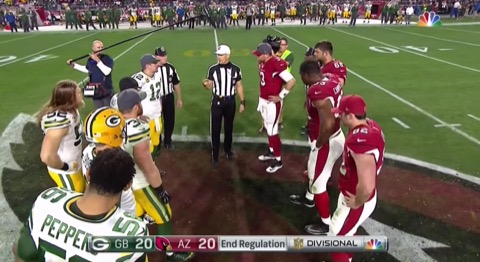 There’s been a lot of talk about coin flips this week because of the botched one at the beginning of overtime in the Green Bay Packers’ loss to the Arizona Cardinals.

Referee Clete Blakeman, who’s now been tapped to officiate the Super Bowl, didn’t actually flip the coin the first time. He just threw it in the air and it fell to the ground without turning over. The Packers, who were on the losing side of that first toss, complained pretty quickly and pretty loudly about it.

Blakeman picked the coin up and actually flipped it the second time and the Packers lost that toss too.

After the game, Packers’ quarterback Aaron Rodgers — who made the heads/tails call — complained about the second flip. He said he wanted a chance to change his original call, which was tails, for the second toss.

I found that pretty interesting when I went back and watched the replay because Rodgers pretty much just seems to walk away after the second toss. He doesn’t appear to be demonstrative or to really say anything for that matter.

Here were Rodgers’ post-game comments on the matter.

“He was showing heads, so I called tails, and it didn’t flip. It just tossed up in the air and did not turn over at all. It landed in the ground. So we obviously thought that was not right. He picked the coin up and flipped it to tails, and then he flipped it without giving me a chance to make a recall there. It was confusing. I think he was trying to avoid the embarrassment of what just happened. He flipped it quickly.”

Probably to some extent.

Rodgers seems to be suggesting he has some sort of system there for shifting the 50/50 odds of a coin flip to his favor. That it all depends on what side of the coin is originally facing up, so he wanted to change his call.

Either way, if he believes that, he obviously didn’t stage a protest on the field.

Jordy Nelson is a Cheap S.O.B.