Vikings Are Intimidated By Packers 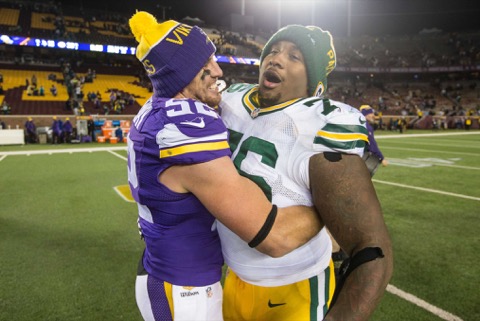 The Minnesota Vikings are intimidated by the Green Bay Packers, according to veteran linebacker Chad Greenway. And why wouldn’t they be?

The Packers have been kicking the Vikings’ asses all over the field for years. Since Mike McCarthy has been the Packers’ head coach, they have a record of 10-4-1 against Minnesota.

Still, it’s rare to hear a football player admit they’re intimidated by anything or anyone. Yet, here it is.

“I think there’s some truth to that honestly,” Greenway said. “Really since [Aaron] Rodgers has come in and taken that role over and actually during the time of [Brett] Favre as well. But we just haven’t played that well against them… So I think it’s just the old adage of, you know, the division goes through Green Bay. We have to go there and prove that we can win, we have to prove that we can beat that football team… [W]e have to get over that hurdle and that’s something we didn’t do and we played uncharacteristically in that game [on November 22] and it just kind of goes to show that fact that we need to play better against them specifically… But again there’s some truth to that for sure.”

Unfortunately, that alone isn’t going to get this Packers team a win against that shit stain of a franchise and another NFC North title on Sunday.

In fact, this scenario reminds me of years past, when the Packers were the up-and-comer — like the Vikings are now — and a superior team that owned them was in their way.

The Packers took their beatings for a while, but eventually they broke through.

I’m speaking of the Dallas Cowboys.

The Cowboys beat the shit out of the Packers in the 90s, with eight straight wins, including three in the playoffs. Then, all of a sudden, the Cowboys got old and gave way to the Packers as the dominant NFC team. The difference in this scenario, is there was no head-to-head match-up that settled it.

Dallas just faded and the Packers kept improving. Ultimately, they didn’t settle it in the playoffs, but in the playoff seeding (or playoff fortitude, if you like).

The point here is, the Packers were clearly intimidated by those Cowboys teams. How could you not be?

Those pricks were a goddam juggernaut.

But eventually, it didn’t matter.

And that always happens.

It could happen for the Vikings. Hopefully not this week, though.