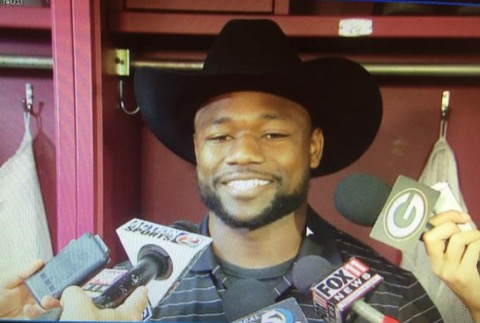 It’s possible this is the week for receiver Ty Montgomery.

The rookie hasn’t played since week 6 because of a sprained ankle and he’s listed as questionable on the Green Bay Packers’ Friday injury report. More importantly, he made it through a full week of practice, something he hasn’t done since the salad days of the Packers’ 6-0 start.

Montgomery is one of three Packers listed as questionable.

The others are right tackle Bryan Bulaga, who missed last week’s win with his own ankle injury, and Nick Perry, who dropped out of practice this week after aggravating his shoulder injury.

The one guy unlikely to play for the Packers on Sunday is center Corey Linsley.

Linsley dropped out of the game in Detroit with… wait for it… an ankle injury!

Because this is the Year of the Sprained Ankle in Green Bay. We’re not quite sure if that’s better or worse than the Year of the Torn ACL (2014) or the Hamstring Epidemic of 2013.

What we do know is it’s always something.

At any rate, don’t expect to see Linsley on the field. He’ll be replaced by J.C. Tretter, who is more than capable.