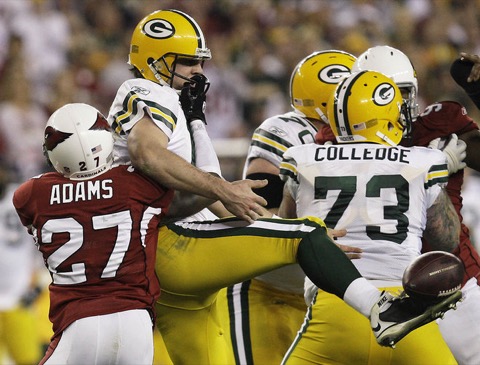 Following the Green Bay Packers’ wild victory over the Detroit Lions there was much hand-wringing about the facemask call that gave Aaron Rodgers the final play that would ultimately send the Leos to defeat.

Mostly by people unlike us. People from Detroit.

People who belong to a team that finds new and inventive ways to let them down week after week, year after year.

Well, we somewhat feel your pain. We’ve been there.

After the game, I immediately had an acid flashback to the 2009 playoffs.

The Packers went to Arizona to face the Cardinals in the Wild Card round that year, losing a 51-45 shootout. The game went into overtime and ended on a Karlos Dansby fumble return for a touchdown.

The fumbler was none other than Aaron Rodgers, who lost the ball when Cardinals cornerback Michael Adams obviously and egregiously grabbed his facemask. You can see the evidence in the photo above.

Any question about whether that’s a facemask?

Only to the officials that day, who kept their flags in their pockets and heads in their asses.