The 2nd Year Jump, As In, Off a Cliff 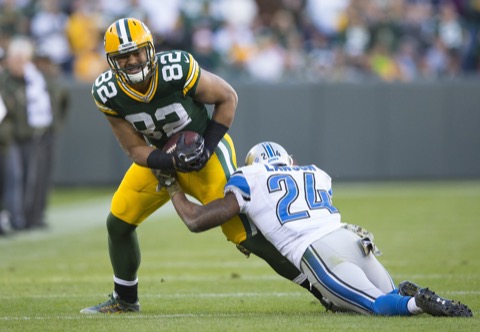 Before the start of the season, I wrote an article talking about the “develop” part of the “draft and develop” formula. Since the philosophy typically means little reliance on outside help, that means young players must develop into better players for the team to get better from one year to the next. The second year is quite often the year when many are expected to “make the leap” into being productive players or even better, into playmakers.

When we look at the season that players I talked about in that article are having, we get a strong indication of why the Packers have struggled lately.

Ha Ha Clinton-Dix – I singled out Clinton-Dix as the most important second year player because he is an every down player. HaHa has had an up-and-down season so far, not far different than his rookie campaign. I love the physicality that HaHa brings to the defense, but I don’t like his coverage skills this season. He still appears to be better near the line of scrimmage, except in Morgan Burnett, the Packers already have a safety who is better near the line of scrimmage. On the plus side, the safety position probably has the longest learning curve of any position in football except for quarterback. Nick Collins was much better in his third and fourth year, and we can hope the same for Clinton-Dix.

Davante Adams – A little theory of mine that isn’t talked about a lot is the value of every player in the league isn’t determined by how good they are, it is determined by how good the guy playing behind them is. If Adams had managed just a solid season this year, then Jordy Nelson would not be as badly missed as he is. Unfortunately, Adam’s second year leap has been right off a pier. Adams clearly has looked slowed by his injury, and A-Rodge was too busy calling preseason games meaningless to bother developing any timing with Adams. They have been off all season, and the Packer offense has suffered greatly because of it.

Richard Rodgers –  As much abuse as we’ve given Rich Rodgers, he is actually the 2nd year player who is the closest to actually delivering on showing some development. He is on pace for a 64 catches, 600+ yards and 9 TDs. That is pretty good numbers for a second year tight end. It is hard to say his blocking has been any better than last year. Still needs some work there and between the 20s. In the redzone, he has been about as good as anyone on the team.

Corey Linsley – Linsley had a good enough rookie season to suggest he might develop into a Pro Bowl type center. After performing around that level for the first five weeks, he hit a wall that culminated in the debacle at Carolina. When Linsley was injured, JC Tretter came in and looked like a better center. Linsley is fortunate to have his job back.

Eddie Lacy – Right, Lacy is not a second year player. However, I believed that there was another level to Eddie’s game. Many fantasy football publications thought the same when some even suggested he might be the overall #1 pick. Well, if you picked Lacy #1 in one of those lame snake drafts, then you might as well donated your money to charity. Lacy is showing a new level to his game: the cellar. The highlight was going out on the town with third stringer Alonzo Harris and missing curfew. In Detroit of all places? Monty says Lacy performs when he gets the ball more. I say that is the chicken vs. the egg argument. Does Lacy perform better when he gets the ball more or does he get the ball more when he performs better? Lacy has a habit of starting fast, cooling off in the 2nd and 3rd quarters, and then being strong in the fourth. So, going away from Lacy when he doesn’t have a good first quarter sounds logical to me. Oh, and the effin guy needs to stop fumbling the football.

All I can say for these guys and the hopes of Packer Nation is late would be better than never.

Previous Article
Cutty! Goes Down!
Next Article
OK. We Have a Winner