That Vikings’ Loss Wasn’t All Great for the Packers 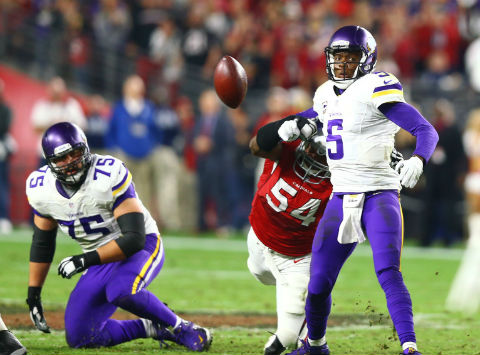 Watching the Minnesota Vikings lose — especially in heartbreaking fashion — like they did on Thursday Night Football is one of our favorite pastimes. While that loss gave that Green Bay Packers’ chances to win the NFC North a boost, it gave their overall playoff outlook a shot.

With the victory, the Arizona Cardinals, who are now 11-2, claimed a playoff spot. More importantly, they sit two games ahead of the Packers for the No. 2 seed in the NFC. The No. 1 seed has all but been formally claimed by the undefeated Carolina Panthers.

The Packers travel to Arizona in week 16, but will have to win their two games before that (Dallas and at Oakland) for the meeting with the Cardinals to have any real implications for the No. 2 seed.

If you look at it that way, a Vikings’ win on Thursday night would actually have been better for the Packers.

There aren’t many scenarios where the Packers don’t make the playoffs. The first goal is to win the division and the second goal is to claim a first-round bye.

The Packers could have done the former by being one game worse than the Vikings in the last four games, so long as they beat them in week 17 at Lambeau Field. In that scenario, the teams would have even records, but the Packers would own two victories over their opponent. That gives them the division.

And that all seems perfectly doable.

However, as it is, the division odds are now very much in the Packers’ favor, but the chances of securing a bye have decreased.

The Packers hold the third seed and trail Arizona by 2.5 games. In order to get that bye, they will most likely need to win out with the Cardinals dropping another game to someone besides the Packers.

The Cardinals are at Philadelphia and then have the Packers and Seahawks at home. It certainly seems unlikely that they’d lose all three of those games.

It’s not an impossible scenario that they’d lose two, but the Cardinals are a good team and they’re doing their part, thus far.

As things currently stand, the Packers would be hosting the Seahawks in a Wild Card game. I don’t know anyone looking forward to that prospect.

Previous Article
When It Comes to Penalties, David Bakhtiari Rules
Next Article
Nick Perry’s Shoulder Injury is Back