So, the Packers Worked Out a Receiver… 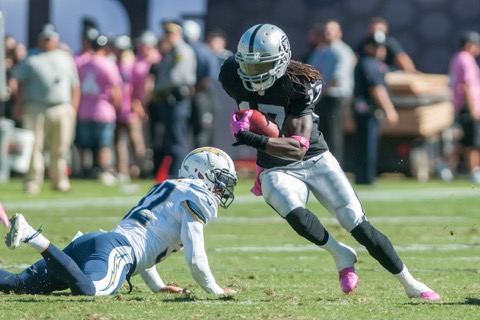 The Green Bay Packers worked out receiver Denarius Moore this week, according to ESPN’s Adam Caplan.

Normally, we pay no attention to these types of things. Teams work out players just about every week during the season to see if they might find something. The Packers are no exception.

The difference between the Packers and other teams is, some other teams actually sign players they work out. The Packers pretty much never do, unless they turn over the bottom of their practice squad with Big Ted’s latest “find.”

So why do we bring up Moore?

Well, let’s get this out of the way first. We do not expect the Packers to sign him.

However, the fact that they brought him in for a work out may signal a couple things.

First, perhaps they’ve come to the realization that the receivers they have just aren’t that good. It certainly appears they are realizing that with Davante Adams. So maybe someone on the NFL’s scrap heap might actually be an improvement over what’s on the roster.

Second, we are strongly beginning to suspect Ty Montgomery won’t be back this season.

Montgomery has a sprained ankle that just won’t heal, which probably means it isn’t a sprained ankle at all. We would not be surprised in the least if the Packers put him on injured reserve one of these days.

As for Moore, on the slight chance the Packers signed him, here’s what they’d be getting.

He’s just 26 and spent six games with the Bills this season, but didn’t record a reception. At one time, Moore looked like a rising star for the Oakland Raiders. His best year came in 2012, when he caught 51 balls for 741 yards and seven scores.

However, his production has decreased in each season since.