Sam Shields and Bryan Bulaga Back At Practice 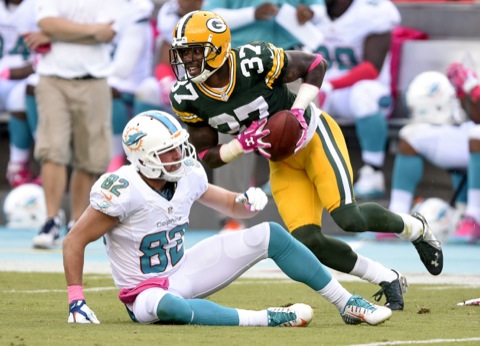 The beat-up Green Bay Packers got some good news on Wednesday with cornerback Sam Shields and right tackle Bryan Bulaga both able to practice.

Shields has missed the past two games with a concussion and Bulaga injured his ankle in the second half of the loss to Arizona.

Rookies Damarious Randall and Quinten Rollins have manned the outside corner spots for the Packers in Shields’ absence. The results have been mixed.

There’s no debate on the fall off in play when Bulaga exited the Cardinals game, though. The Packers brought in Josh Walker, who was atrocious, and then replaced him with backup center J.C. Tretter.

Even though Bulaga isn’t particularly good, Walker has shown in limited action that he doesn’t even belong on the roster.

That whole fiasco transpired because left tackle David Bakhtiari sat out last week because of an ankle injury. That appears to be a possibility again this week, as Bakhtiari wasn’t even at practice on Wednesday. If Bakhtiari remains out, that keeps Don Barclay in the lineup.

B.J. Raji, who suffered a concussion in Arizona, was also absent on Wednesday. Defensive lineman Mike Daniels (hamstring), outside linebackers Mike Neal (unknown) and Jayrone Elliott (quad), and tight end Justin Perillo (hamstring) didn’t practice, but worked on the side.