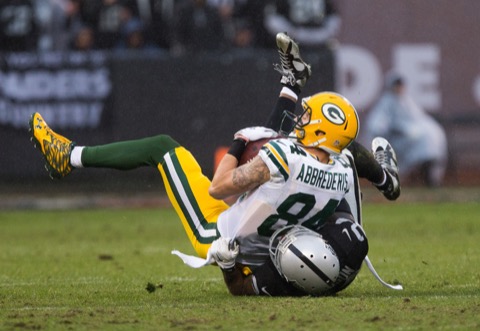 Yes, Abbrederis has surpassed Jeff Janis for that role. He got two more offensive snaps than Janis on Sunday.

None of that is terribly noteworthy, but this is.

Quarterback Aaron Rodgers was lobbying for more Abbrederis after the game.

“He can get open,” Rodgers said. “He’s a good route runner. He needs to be on the field more.”

That right there makes Abbrederis different from the Packers other receivers — the fact that he can get himself open.

That alone should get him on the field more.

Of course, it hasn’t.

Last week, the Packers coaching staff was talking up Abbrederis, suggesting he had earned more playing time. Sure, they didn’t mention how much more playing time, but 15 snaps isn’t really what we had in mind.

That’s how many Abbrederis played in Oakland.

So maybe we could up that a little more this week, huh guys?

Alternatively, we could just keep trying to throw to pieces of shit like Davante Adams and Richard Rodgers. Because, listen, one of these days, those guys are going to magically be great!