Rodgers Cites Lack of Deep Threat as Issue, Is So Right 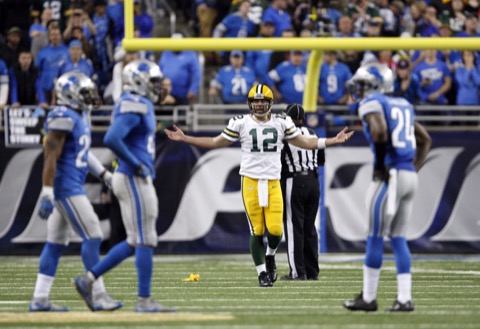 We all know the Green Bay Packers’ offense has been bad this season. We all know quarterback Aaron Rodgers is authoring the worst season of his career.

There have been a lot of attempts to pinpoint the culprit for those issues.

You know, take your pick.

Rodgers actually has a theory that’s better than all of those.

“I think we have to rely a little bit more on the run this year,” Rodgers said, “because we just don’t have that deep threat that we’ve had that’s been able to open up some of those two-man routes deep down the field.

“We just don’t have that element to our offense. We just have to be a little more patient and realize it’s going to be more of a grind-out game sometimes.”

And actually, it’s not just a theory. It’s a fact.

While compiling the numbers to illustrate just how off Rodgers has been this year, we noticed he was hitting hardly any deep balls. Rodgers has just six completions of 40-plus yards this season (and one of those was a Hail Mary).

That will be the lowest of his career as a starter. Even in 2013, when he only played nine games, Rodgers had seven completions of 40-plus. He hasn’t had less than nine in any full season until this year.

Now you may say there’s not a big difference between six and nine completions, but it means the opposition doesn’t have to worry about the deep ball.

It’s not as if they’re throwing a ton of double coverage at the Packers’ inept receivers. With no deep threat, that allows defenses to blitz heavily, as you saw in Arizona, or stack the box to stop the run, as we’ve seen on multiple occasions.

Jordy Nelson is obviously the guy who provided that deep threat in years past, but so did Greg Jennings, Jermichael Finley and even Donald Driver, at times. The Packers relied on one guy to do that this season and when he got injured, they were screwed.

Previous Article
Top Green Bay Packers’ Stories By Month
Next Article
B.J. Raji is Back From That Concussion