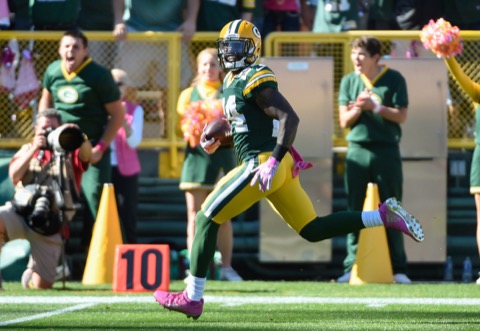 We’ve been an advocate for Damarious Randall since early in the season and the Green Bay Packers finally acquiesced and made the play-making rookie a regular on their defense. Well, now is the time for fellow rookie cornerback Quinten Rollins, too.

We found this nugget buried in an article about Casey Hayward’s disappearing ball skills — Rollins has played just 136 defensive snaps. In that time he has two interceptions and six passes defended.

Those two picks tie Rollins for most on the team and while that number alone isn’t terribly impressive, getting two picks in just 136 snaps certainly is.

By comparison, the guys who share that team lead with Rollins — Sam Shields and Randall — have played 685 and 548 defensive snaps, respectively.

Hayward, who doesn’t have any picks, has played 696 snaps. Micah Hyde, who has one pick, has played 558.

Let’s break that down real quick.

Rollins is intercepting a ball at a rate of a little greater than 10 per 700 snaps. Similarly, he’s knocking down a pass just over 20 times per 700 snaps.

Those are pretty damn good numbers.

And sure, we know they would change the more snaps Rollins got, but the point here is he’s making plays at a higher rate than any of these other guys.

And you probably know what we’re going to say next.

That should put Rollins on the field ahead of guys like Hayward and Hyde, who have proven they don’t possess the ball hawking abilities of guys like Randall and Rollins.

Richard Rodgers Sr. on The Play

Richard Rodgers Sr. on The Play