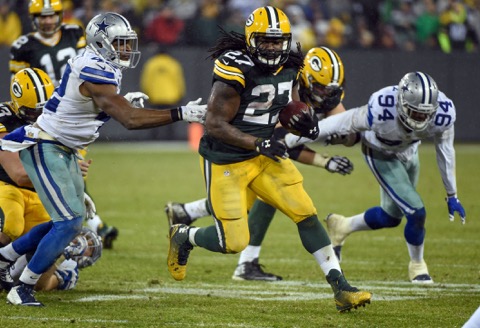 The Packers welcomed Eddie Lacy back this week, and not the guy who looked hesitant and slow and suffered from fumbilitist for most this season. No, they got back the Easy Eddie Lacy who moved piles and broke arm tackles all game long.

Their passing offense once again in neutral, the Packers ultimately rode Lacy, James Starks, and the offensive line to 233 yards rushing and a 28-7 win over the punchless Dallas Cowboys.

Next week will be a better indication whether the Packers were fortunate to have Mike McCarthy back as a play-caller or McCarthy was fortunate that rainy conditions heavily suggested he run the ball and stick with it.

We did see a less predictable offense that had the audacity to run a quarterback keeper at the goal line, with no success, and a fake end around to Randall Cobb screen to James Starks that caught the Cowboys completely by surprise and resulted in a walk in touchdown. Unfortunately, McCarthy also perhaps outthought himself when he decided to try a series featuring Cobb in the backfield, which put his two most productive players for the night- Starks and Lacy- on the bench for a drive that predictably ended in a punt.

Regardless of the extra razzle-dazzle, McCarthy was no more successful getting the Packer passing game going than Tom Clements has been. Aaron Rodgers finished with a similar stat line as what he’s been doing all season- 22/35 for 218 yards and 2 TDs with no picks. The Packers had no explosive plays via the pass with one 20+ yard pass play all game, which was a 24 yard catch on a screen play to Eddie Lacy.

I said before the game that even though the Cowboys are missing their starting quarterback while the Packers have their 2-time MVP starting, these two teams are playing similar ball, and we saw that through most the first three quarters. Both teams could run the ball some, but whenever a run play was stuffed or a third and short came up, both offenses typically came up empty. These are the two worst teams at 3rd and 1 in the league, which means they can’t run to pick it up, and when you combine that with a passing game unable to make plays, many punts are sure to follow.

Fortunately for the Packers, besides going brain dead on two long runs by Dallas, the Packer defense held up better and longer against the Dallas offense. Finally, the Cowboys’ athletic but undersized defensive line started to cave. By the Packers’ final two drives, their offensive line was completely dominating the line of scrimmage, allowing the two big backs to run roughshod over the Dallas defense.

James Starks had the backbreaker with a 30 yard touchdown run on a draw on 2nd and 25, and then Eddie Lacy finished it by barreling his way for a score under three minutes. Those two scores turned a defensive battle that was 14-7 with five minutes left in the game to a 28-7 whipping at the final gun.

The Packer defense held up despite losing Sam Shields to a concussion, according to the Packers, early in the second quarter. That put Damarious Randall on Dez Bryant for the remainder, and in what was another highlight to a stellar rookie season, Bryant had zero catches for the rest of the game. Micah Hyde also had a big game with several tackles that kept receivers just short of first downs.

In the end, the Packer offense just rode it out until Lacy and Starks got it going to put the game away. With the win, the Packers improved to 9-4 and are back alone on top the division. Probably most importantly, it got the Packers back on track at home, ending their horrific two game losing streak there, which will live in infamy.

With the win, the Packers have guaranteed that at worst, the season finale against the Vikings will give them a shot to win the division. Hopefully, the Packers won’t rely on that.