Packers’ Next Free Agent Target Not Nearly As Exciting 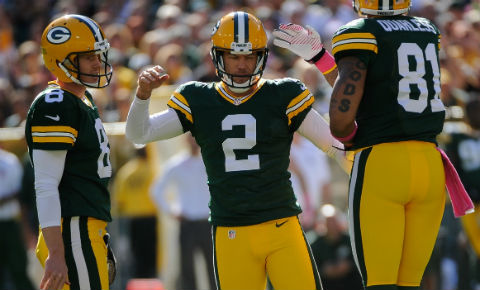 The Green Bay Packers did part of their offseason work this week when they extended defensive end Mike Daniels. They still have plenty of guys who will be free agents in March, though.

Thing is, Daniels was really the only big name on that list. Yes, you’ll recognize some of the others and you’ll probably want some of them to return, but losing any of these guys wouldn’t ruin 2016 for the Packers.

In our estimation — and you’ll love this — Mason Crosby is now the Packers’ most valuable free agent in waiting.

He’s currently hitting 86.4 percent of his field goals. If it holds, that would be the second-best percentage of his career.

The guy was garbage back in 2012, but he’s hit above 80 percent on field goals every season since. The Packers have got themselves a solid kicker. Why not keep him around?

The only argument that could be made for another player being more important is the two-headed monster of B.J. Raji and Letroy Guion.

Somebody has to play the nose next season, after all.

Well, Raji started off like gangbusters, but hasn’t done much of anything since about week 5. He hasn’t recorded more than a single tackle in a game in six weeks and he’s been blanked twice in that stretch.

Guion, meanwhile, is playing out of position at defensive end because Raji’s fat ass can ONLY play the middle. Not surprisingly, he hasn’t produced as well as 2014, when he was playing the nose.

That doesn’t do much for either guy’s value.

Pretty simply, no one left on that list is a must-have for 2016.