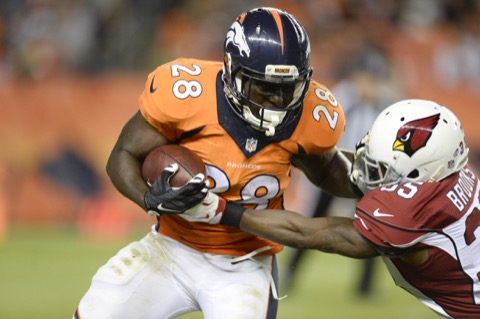 Well, this certainly is interesting. The Green Bay Packers had running back (and Badger great) Montee Ball in for a tryout on Friday.

Ball was a 2013 second-round pick of the Denver Broncos.

You probably know another running back who was drafted in the second round that year.

And that’s why Ball’s appearance is interesting.

The Packers shuffled their running backs, releasing Alonzo Harris and replacing him with John Crockett, on Thursday. Crockett got five carries against Detroit and ran for 22 yards.

Meanwhile, the aforementioned former starter, who also happened to be coming off two straight games of 100 yards or more, only got five carries of his own against the Lions. Lacy gained just four yards on those carries, but was clearly an afterthought in the game plan from the outset.

James Starks got the start for the Packers. He ran nine times for 15 yards.

What does this all add up to?

We’re not quite sure, but the inmates may very well be running the asylum.

As for Ball, the Broncos cut him prior to the start of this season and he’s been out of work since.

He had a decent rookie year with the Broncos, averaging 4.7 yards per carry, but played in just five games in 2014 because of injury. When he was healthy, he wasn’t very good. Ball gained just 172 yards on 55 attempts, which is 3.1 yards per carry.

Now We Know What's Going On with Eddie Lacy