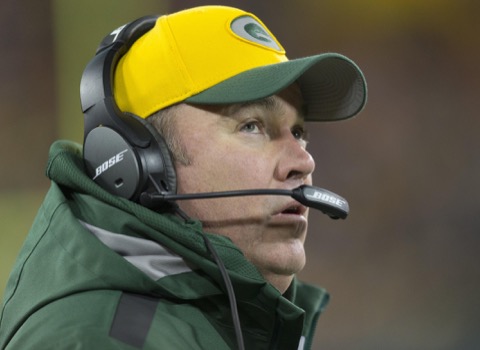 We got some vintage Buffoon on Monday. That’s when Green Bay Packers head coach Mike McCarthy, AKA Buffoon, tried to explain his reasoning on playing time.

When asked why receiver Jared Abbrederis — who we have continually heard has earned more playing time — only played 14 snaps, Buffoon stated that his second-quarter drop contributed to his limited action.

“Well, Jared Abbrederis had some opportunities,” McCarthy said Monday. “Had the dropped ball on the big play there. However the substitution patterns go for each position group after that is usually based on performance and things of that nature.

“Obviously our production in the offense wasn’t really — it was poor. I don’t think this is really the time to talk about snaps.”

Yup. Nothing to see here. Let’s move along.

Except, maybe the local media is finally as sick of hearing this shit as we are.

Someone had the balls to press on, pointing out that Davante Adams has dropped a shit ton of passes and yet, he still plays. That dumpster fire got 51 snaps in Arizona.

What did Buffoon have to say about that?

“Who plays, where they play really has no concern, really is not even a topic in here,” McCarthy said. “Those decisions are football decisions. For me to get into every ‘if and but’ of why this guy played and why this guy didn’t play, and your opinion based on this player vs. that player — I’m not saying Jared didn’t play because of that one play.

“But that’s just the way the rotation came about, and really a lot of that is based on communication on the headsets, things we’re getting to, things we’re trying to do, and each position coach at the end of the day is responsible to make those substitutions.”

Oh, yes. That makes it clear.

Clear that you have either no idea why things are being done or have totally lost control of this situation.