by Monty McMahon
in Uncategorized
61 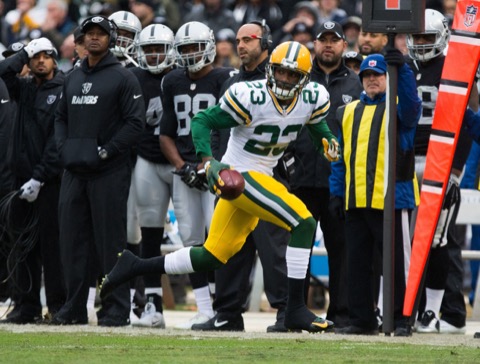 The Green Bay Packers got themselves a 30-20 win over the Oakland Raiders on Sunday.

And that’s about the best thing we can say about that.

The Packers had already secured a playoff spot prior to the game because of the New York Giants’ loss to Carolina earlier in the day. So the win over the Raiders kept the Packers a game ahead of the Minnesota Vikings in the NFC North and alive for the No. 2 seed, which is currently held by Arizona.

Now, about the win itself.

Was it done with smoke and mirrors?

We’re not quite sure. The way the Packers played on Sunday, it didn’t seem like they would have beat the Bay Port JV squad by 10, much less an NFL team.

It was kind of like a couple of mentally challenged dudes got in a boxing match and, well, one of them had to win. Except, in reality, the level of ineptness was greater in one participant than the other.

And on this day, your inept Green Bay Packers were slightly less inept than the inept Oakland Raiders.

So, you know, got that going for ’em!

Seven days after throttling the Dallas Cowboys with a punishing ground game led by Eddie Lacy and a stifling defense led by a dominant secondary, the Packers decided, ah, what the hell. Let’s just throw all that stuff out the window!

The Packers defense wasn’t particularly good on this day, giving up a total of 372 yards and a pathetic 4.8 yards per rush, but the offense was right back to being downright terrible. The Packers managed just 293 yards of total offense. They didn’t bother trying to establish Lacy (11 carries for 23 yards) and, as usual, guys like Davante Adams and Richard Rodgers looked like clowns.

These two guys literally looked like they had no business being in the NFL on Sunday.

The one guy who got something done in the passing game was James Jones and his hoodie, who caught six for 82 and the Packers’ lone receiving touchdown.

What was more confusing was offensive genius Mike McCarthy’s play calling. After taking over those duties last week, McCarthy quickly established a game plan that played to the Packers’ current strengths — run Lacy a lot and get Randall Cobb in favorable match-ups by lining him up all over the place.

This week, McCarthy did very little of the former and some of the latter. However, it seemed more like his objective was to try to confuse everyone by going pass-first — Aaron Rodgers threw 39 times, completing just 22 — and to feature James Starks and John Kuhn in the backfield.

Considering how bad the Packers offense was, it’s amazing they put up 30 points.

In fact, Raiders quarterback Derek Carr was pretty much the Packers offense in the first quarter.

The first, which was intercepted by Micah Hyde, was returned inside the Raiders’ 10. So that set up a short, five-yard TD run by Kuhn. The second was picked by Randall and taken 43 yards to the house.

So essentially, the Packers offense really only scored 17 points.

And we doubt they would have had those if it weren’t for some opportune penalties. The Raiders drew 10 flags for 95 yards. Two of biggest came on third down pass interference calls and allowed the Packers to sustain drives.

Hell, even Jones’ touchdown came after Jeff Janis returned a kick out to the 47.

Obviously, the resurgent Packers offense is not resurgent at all. It’s still total fucking garbage, but the stench was temporarily covered up by some air freshener or maybe one of the plug-in things.

The story today was the Packers defense made just enough plays to stop the offense from blowing another one.