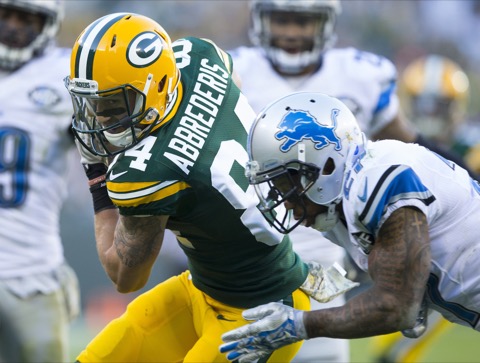 If you’re looking for a receiver who hasn’t played much of a role for the Green Bay Packers to start playing a larger one, that guy is probably not Jeff Janis. It’s Jared Abbrederis.

The coaching staff is raving about Abbrederis’ attention to detail and practice habits and that’s likely to earn him more opportunities down the stretch.

“He’s put together a couple of nice weeks of practice in a row, so I expect to see him earning more playing time,” receivers coach Alex Van Pelt said.

Abbrederis has just five catches for 73 yards this season, but he’s only been active for six games. Abbrederis started the season on the practice squad and then missed a couple weeks with a rib injury.

After missing the entirety of his rookie season with a torn ACL, this is really Abbrederis’ first action in the pros. And so this is about the time you’d expect him to start coming on.

Will Abbrederis save the Packers’ passing offense?

That seems like a stretch, but he certainly could be an improvement over James Jones or Davante Adams as Aaron Rodgers’ second or third option.

Previous Article
Eddie Lacy is Back Atop the Depth Chart
Next Article
McCarthy Reverses Course, Takes Back Calling Plays