James Jones Ain’t Mad; Should Be 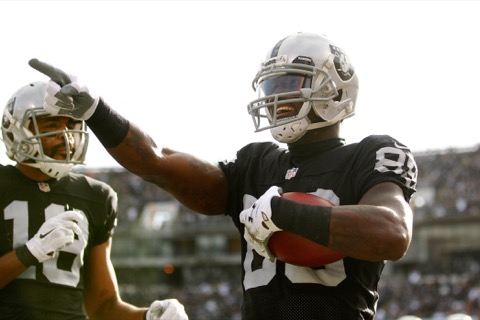 Jones seems to like it that way. Unlike Woodson, he’s playing the “It’s just another game” card.

“It would be good to back and win, see some of those guys,” Jones said. “But like I was telling these guys the other day, I go into every game trying to catch a million balls and get a million yards. It’s not going to change for me, man. I just want to play well, the same way I go into every game.”

Thing is, Jones should want some revenge.

As crappily as Woodson was treated by the Packers when they decided to go another direction, Jones was treated even worse by the Raiders.

Jones signed a three-year, $10 million deal with the Raiders in 2014. He caught 73 balls for 666 yards and six touchdowns that season. Not exactly setting the world on fire, but good enough to be the best and most consistent receiver on the Raiders, who were breaking in rookie QB Derek Carr.

Then the Raiders drafted Amari Cooper and signed Michael Crabtree, this past offseason. In May, they decided they didn’t need Jones anymore and released him.

Well, what’s the big deal? Guys get released every offseason.

Yes, they do, but almost none of them get released in May. Most teams have the decency to release veteran players in February or March before free agency and the draft. In other words, before every other NFL already has a full roster.

Then those players can pretty easily find a new team.

Releasing someone in May pretty much kills their chances of catching on with another team until some unit suffers a long-term injury at the position. Basically, “Yeah, we’re going to go in another direction, but we’re going to bend you over this here couch and pound you real hard in the ass for a while, first.”

Who would do such a thing?

Why, none other than Ted Thompson protégé Reggie McKenzie, the general manager of the Raiders.

And all’s well that ends well.

Except Reggie McKenzie is still a scumbag for the way he handled this.

We hope Jones goes out and puts up 150 and two touches and then points up at whatever box that dick is hiding in after the second one and says, “This one’s for you, old pal.”

Only a Rampant Virus Could Derail the Packers Now!

Go Ahead and Guess Who's Injured Again