by Monty McMahon
in Uncategorized
36 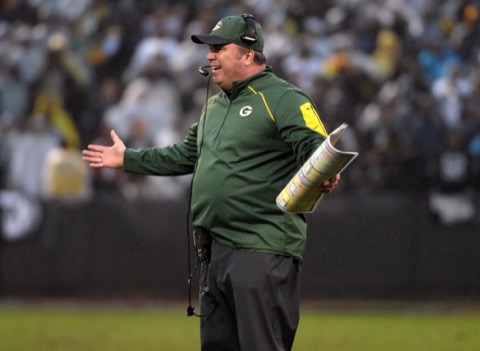 You know we love this shit. The unaccountable, screw you guys B.S. instilled in the Green Bay Packers organization from the top down. Today, let’s hear from head coach Mike McCarthy!

“We’re right where I wanted to be, right where we need to be,” McCarthy said. “The style points, you can flush that. I’m sick of talking of the negativity that goes on here. We won 10 games. We lost three games, but that’s the game. Denver beat us. That’s the overview of the season. We have a chance to win 11 next week.”

That’s Big Mike responding to the fact that no one is particularly impressed with the Green Bay Packers even though they’ve won 10 games.

How dare you criticize his football team!

I believe the actual question that provoked that response was something along the lines of, “Can you get this team playing playoff-caliber football?”

You know, because they’re clearly not playing playoff-caliber football.

In fact, unless something changes pretty quickly, this team is going to get their asses kicked by the Minnesota Vikings in the first round. And that’s about as appealing as eating a pile of rat assholes for lunch.

But listen, you do not criticize Big Mike’s Green Bay Packers!

They are clearly a top-notch unit! These guys are going far! The sky is the limit!