by Monty McMahon
in Uncategorized
54 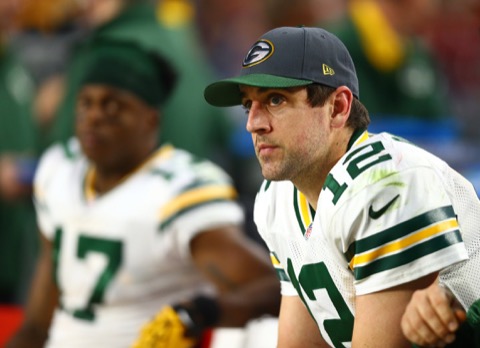 I was one of the dipshits who forked over a bunch of money to go watch the Green Bay Packers get their asses handed to them by the Cardinals in the New Jersey of the west.

After that experience, I honestly think I may never attend another NFL game again. I paid over $1000 for go sit in some uncomfortable seats next to some assholes I don’t even like to watch a football team that might as well be a Hefty bag filled to the brim with pig excrement.

I could have done that from the comfort of my home. And if my football team were a sack of pig shit, that would have been more entertaining than watching the Packers play the Cardinals.

I mean, watching the Cardinals get into with a bag of shit and the ensuing hijinks that would have occurred — that’s at least good for a laugh.

The Green Bay Packers provided no such sense of fulfillment on Sunday.

They are, for that reason, less than a sack of shit.

So, let’s make a quick checklist.

Well, we’ll have to wait a couple weeks for that last one to happen, but it will happen.

But whatever. Let’s get on with this shit.

Way to out buffoon yourself, Buffoon
Well, we thought having Mike McCarthy calling plays again would give the Green Bay Packers offense a chance to improve. WRONG! Buffoon is back to his old tricks — trying to outsmart everyone, but only outsmarting himself. The Packers didn’t even give a second thought to trying to establish a running game, even though they knew the offensive line was going to be an issue. Don Barclay isn’t much of a left tackle, but he does do one thing well — run block. But we’re not going to bother with the run. We’ll get them with our vaunted passing attack!

So, why don’t you explain to us how your offense has direction again this week, you BUFFOON!

Not Jake Ryan’s best day
Rookie inside linebacker Jake Ryan had probably his worst game as a starter. He had five tackles, but was exposed as a liability in coverage. Ryan was late getting out to his man on a number of occasions. He got outrun on others. It’s also possible he didn’t know his assignments as well as he should have, but we’re just making an assumption there.

Oh, and let’s not forget these no-shows
Clay Matthews, who spent much of his day rushing the passer, put up zeros across the board. Julius Peppers, who turned in 2.5 sacks a week ago, had one tackle. That’s it.

The tone was pretty much set for Matthews’ day when he got plowed right over by David Johnson in the first quarter. Perfect position to make the tackle — run over like A.J. Hawk. The Packers apparently decided that they’d let Matthews just rush the passer from then on and he didn’t do any better there.

However, if you expect to beat a great team, then your best players need to make an impact. The Packers got zero impact from two of their best defenders on Sunday.

And what of Randall Cobb?
It seemed pretty clear that the Packers wanted to run their offense through Randall Cobb when McCarthy took over play calling. But then again, maybe not.

Cobb was targeted three times on Sunday. He caught all three, but only for 15 yards. He rushed once for two yards. So, four touches for what we’re going to assume is the focal point of the offense.

Elite no more
Sure, he was sacked eight times, but Aaron Rodgers wasn’t even playing well on the plays he got protection. That trademark accuracy has disappeared into thin air. The decision-making isn’t great anymore either.

Rodgers accounted for three of the Packers’ four turnovers on Sunday. Two were fumbles and we’ll let those slide. Those are on the dog shit offensive line. The interception in the end zone, we will not let slide. After Mike Daniels’ interception, the Packers should have scored and been right back in the game at 10-7 or, at worst, 10-3.

But Rodgers wasn’t having that. He lofted a third-down pass into the end zone for an easy pick by Justin Bethel. It was the kind of throw that’s so stupid, Jay Cutler wouldn’t even have made it.

Here are a couple more telling statistics. Rodgers currently ranks 24th in the NFL in completion percentage and 28th in yards per pass.

Rodgers wasn’t part of the solution on Sunday. He was part of the problem. QB1 has been shit this year. Maybe he doesn’t have enough talent around him, but great players make the spare parts they have better than they knew they could be. Tom Brady rarely is playing with a cast of offensive all-stars, yet he’s always one of the best players in the league on one of the best teams in the league.

He elevates the play of others.

Rodgers has shown no sign he can do that.

We all thought he was an other-worldly talent. Turns out, he’s just a really good talent who’s only other-worldly when the guys around him are really good. Rodgers isn’t elevating shit this season.

And that’s the primary reason this season is going down the toilet.

These Three Things Sum Up the Packers’ Day

These Three Things Sum Up the Packers' Day