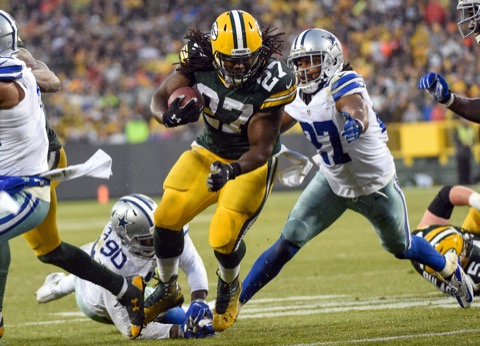 The Green Bay Packers maybe got back on track offensively in beating the overmatched Dallas Cowboys 28-7 on an unseasonably warm day at Lambeau Field on Sunday.

I was at the game and I’ve never been to another football game like it. It’s December in Wisconsin and I don’t think the temperature dropped below 50 degrees all day. It also rained all day, so it was wet.

And for once this season, the Packers actually did something that made sense offensively. And right there, you have the difference between Mike McCarthy and Tom Clements calling the plays.

At least that’s how I’m going to look at it.

Run the football, stop the…
Well, the Packers got half of that right on Sunday. They ran the football plenty and they ran it well. The Packers totaled 230 yards on the ground, with Eddie Lacy getting 124 yards on 24 carries and James Starks adding 71 on 11. They really didn’t do much to stop Dallas from running the football though, at least on defense. The Cowboys had 171 yards rushing on just 20 attempts. That’s 8.5 per carry. Darren McFadden had 111 of those yards on just nine carries. So you can see what happened here. The Packers couldn’t stop the big gains. McFadden ripped off a 50-yarder and Robert Turbin had one go for 22. On that McFadden run, Clay Matthews was the guy who needed to stop it at the line of scrimmage, but he got shoved to the outside, which created a huge hole. This type of run defense isn’t going to get it done in the playoffs. Luckily, the Cowboys were playing from behind and they didn’t have the luxury of running the football.

By the way…
Eddie Lacy carried the offense, just like we said he was going to. So the next media hack who suggests Lacy isn’t getting it done because he’s fat, I am going to personally come to your home and punch you in the kidney until you piss blood. That narrative is beyond ignorant.

Sorry, Dez
It certainly seemed like the Cowboys were looking to feed Dez Bryant the ball on Sunday. They threw it to him six times, but he ended up with just one catch for nine yards. That’s a hell of a job by the Packers’ secondary. First, it was Sam Shields. Shields suffered a concussion in the first half, which put Quinten Rollins in. Rollins and fellow rookie Damarious Randall manned the two outside spots the rest of the way. That’s shaping up to be a formidable secondary.

The return of the hoodie
James Jones hasn’t had a good game since the Packers played at Minnesota. That’s also the last time he wore that ridiculous sleeveless hoodie under his jersey. After topping 100 yards against the Vikings, Jones caught one pass for 19 yards over the next two weeks combined. So he must have figured he needed the hoodie to play well. Jones didn’t really set it on fire, but he did increase his production, catching four for 49 against Dallas. As far as we’re concerned, it’s hoodie weather from here on out.

Back to reality
Or by the way II. A lot of you were jumping on the Richard Rodgers’ bandwagon last week after his career-best game. Some of you even derided us for pointing out the fact that a single good game does not a season or career make. Well, well, well… Where was your fucking boy DickRodge on Sunday? I’ll tell you where. M.I.A. One catch, three yards. And things are right back to normal. Please, regale us with tales of how DickRodge is a top-tier tight end again.

Mike Daniels Has a New Contract