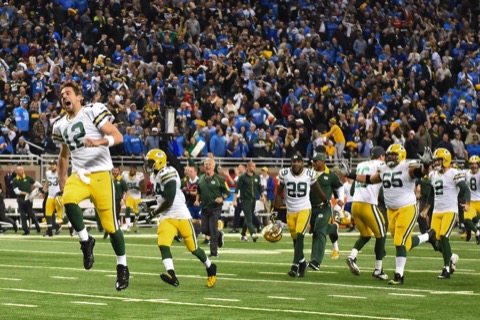 Well, it’s been a long time since we’ve seen anything like that. The Green Bay Packers pulled off an improbable 27-23 win over the Detroit Lions on a Hail Mary on the game’s final play.

I saw a lot of people saying this saved the season and, well, I couldn’t disagree more. Win or lose, the Packers were most likely going to be in it until the end.

The Vikings hold just a one-game lead (now a half a game) over the Packers and have games against Seattle and at Arizona coming up. They then finish the season at Lambeau Field. If the Vikings and Packers finish with the same record, but the Packers sweep the season series, they’re division champs.

At any rate, this win does put the Packers in much better position for the division crown.

Despite playing some of the worst football I’ve seen since the 1980s over the past month, the Packers are still somehow right there in the thick of things.

We’re not going to call this the turning point of the season because, let’s be honest, Green Bay was beaten for 60 minutes on Thursday night. They should have lost that game, which would have been five of six.

And you know what? Only Detroit.

The one person I know who’s a Lions fan was texting me during the game. After the final play, he let loose a maniacal laugh and, probably rightfully, questioned the facemask call that gave the Packers that final play.

All I could say was this.

“I feel like if we were playing anyone other than the Lions, none of that would have happened. You’re cursed.”

And with that, let’s get it on.

So long, running game!
We’ve established — over and over again, in fact — that the Packers need to make a commitment to running the football in order to actually establish a running game. Specifically, they need to hand the ball to Eddie Lacy 15 or more times during the game. They can hand it to other guys, but Lacy needs the touches to get going and if he gets going, he can carry the offense. The Packers sorely need someone to carry their offense right now because no one in the receiving corps is capable of doing so.

Lacy was coming off consecutive games of 100 yards or greater. So what did the Packers do? They handed the ball to Lacy only five times, went back to James Starks as their lead back and played rookie John Crockett more extensively than anyone expected. The Packers rushed for just 67 yards, 27 of those coming from quarterback Aaron Rodgers.

That’s all probably just coincidence if you ask the Packers coaching staff, though.

This bullshit of not playing Lacy for whatever made-up reason has got to stop. I don’t care that he fumbled last week. He was also the only reason the offense moved the football at all. The ignorant dicks directing this offense need to get that through their thick fucking skulls. Unless Lacy fumbles three times in a game AND plows your wife on the field at halftime, he needs to be in the goddam game!

Oh, that’s right, nothing has changed…
It was amazing to me, watching the Packers lose last night’s game (right up until they didn’t), how inflexible and idiotic the coaching staff is. The team had lost four of five. Most teams lose four of five, they make some changes. Maybe in staff, maybe in personnel, maybe in play calling, maybe in scheme, maybe in all of it. Not the Green Bay Packers, though. Helllllllllll no! They just come out and do the same old shit with the same old people and assume the results will change.

The biggest thing that sticks out to me was the play calling. Once again, awful. It’s as if some of the plays were designed to lose yards. Love those slow-developing runs and those three-yard outs, Tom. String together eight of those in a row, we might get a first down. You know, as long as they give us eight downs to gain 10 yards. You’re a real dynamo with a play chart in your hand.

The personnel also comes to mind. Eddie Lacy is on a roll, let’s get him to the bench. Davante Adams is just plain awful, let’s feed him the ball again. Jeff Janis could be a difference maker, so let’s say we’re going to play him more and then not do it. I could go on and on about this.

This year, Mike McCarthy has started to remind me of Mike Shanahan. They’ve both won Super Bowls. McCarthy has costed on that for a while. Shanahan did too. Like McCarthy, he was considered an offensive genius. The thing is, after a while, Shanahan started to fail. You could say it was because he didn’t have John Elway and Terrell Davis anymore. I’d argue it was because he insisted on running the same system, i.e. doing the same thing, year after year. He wasn’t flexible and didn’t adapt. Kind of like Mike McCarthy.

Receiving 101
This is simply pathetic. I cannot believe this has to be said, but it obviously does. Have you noticed anything weird when Aaron Rodgers escapes the pocket?

This is when the Packers are supposedly playing schoolyard football. Receivers break off their routes and run to an open spot. It’s supposed to be when Rodgers is at his improvisational best. Just one problem with that. The Packers receivers are a bunch of idiots.

Every time we saw Rodgers scramble out of the pocket on Thursday night, the receivers all just kept running downfield. That’s probably fine is you’re Willie Gault or White Shoes Johnson, but these assclowns can’t run by anyone. So these slow-ass, dim-witted sons of bitches are doing the exact opposite of what they should be doing.

YOU COME BACK TO THE FUCKING BALL!

But not the Packers receivers. They’ll just keep running that fly route all the way to hell, tightly covered.

Well, it’s about damn time…
Okay, I know. The coaching staff did make one change going into the Detroit game. They replaced Nate Palmer with rookie Jake Ryan at inside linebacker. Ryan responded with a team-leading 10 tackles.

Because you know what?

Of course he did.

Palmer has been playing like ass all season. What the hell took these morons so long to make this move is beyond me. Two guys who currently have similar skill levels, you always play the guy with the higher ceiling. That’s Football 101, guys.

Banged up and beaten down
It’s a good thing the Packers have a long week and will get a few days off before coming back to prepare for Dallas. They are clearly an injury-riddled football team.

If you’re looking for hope that this is indeed the turning point, there’s the sliver of it we’re going to leave you with.

Previous Article
Miracle Final Play Gives Packers 27-23 Win Over Lions
Next Article
One Game, a Season or Career Does Not Make