Eddie Lacy Got the Message, Was Miserable 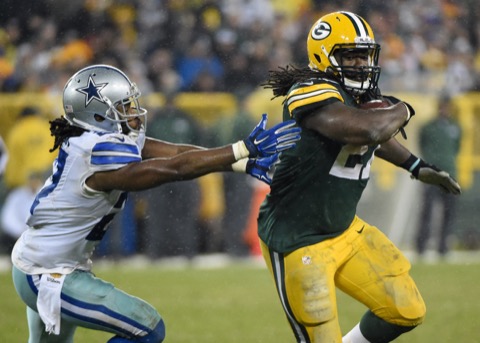 Eddie Lacy got that message loud and clear.

Being benched a week ago brought some things into focus for the Green Bay Packers running back. Namely, that he’s not happy riding the pine and that he really does love football.

“Just getting back on track,” Lacy said. “I know the last few weeks, things were a little different, but I think it was just the way to show me this is what I love to do and, without it, I’m miserable. And with Coach taking me out and going through that, it just showed me that’s not what I want. And by him giving me a chance to come out and redeem myself, I think it was just a blessing in disguise.

“It showed me without this game, without this sport, I’m not happy. I’m unhappy because this is what I like. So I think it was just something that had to happen to jump-start and keep my mind focused like I’ve always been.”

There were indications during the week of practice leading up to the Dallas game. Packers coach Mike McCarthy said Lacy looked rejuvenated.

We figured he’d go out and carry the offense and that’s just what he did, responding with his best game of the season. Lacy ran for 124 yards on 24 carries against the Cowboys. That’s 19 yards better than his previous season high.

Frankly, we expect more down the stretch.

Statistically, Lacy is likely to end up turning in his worst season as a pro. However, that matters little if he can carry the team through the playoffs like he did against the Cowboys.

Mike Daniels: I Wanted to Be in Green Bay

Mike Daniels: I Wanted to Be in Green Bay