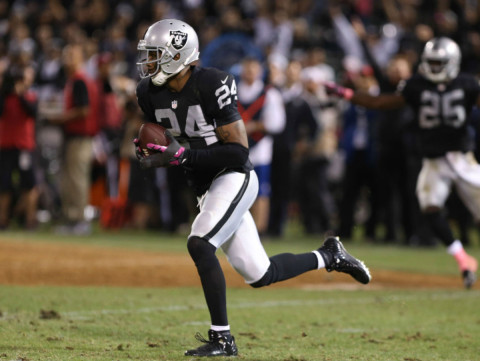 The Green Bay Packers play the Oakland Raiders this week and the talk has turned to none other than our main man Charles Woodson, current Raider, former Packer.

We love Chuck and we hate how the Packers unceremoniously dismissed him back in 2013. They didn’t even suggest he take a pay cut and instead just cut him.

The message was clear: we don’t think you can play anymore.

What did Big Ted think at the time? He thought, “Oh boy, I can’t wait to get this guy Jerron McMillian on the field!”

And we’ll never forgive him for that buffoonery.

Charles has gone on to have three productive seasons with the Raiders. This season, he has five picks, which is good enough for third in the league.

The Packers have had nothing but good things to say about Woodson, this week. And why wouldn’t they? The guy is maybe the best defensive back to ever live.

Woodson isn’t saying anything negative about the Packers, but it’s clear the way his release was handled stung. You know — Big Ted, master of tact.

You know, it would have been nice if Charles finished his career with the Packers.

And yes, we know the guy has lost a step, but he had more steps to lose than 99 percent of the guys who ever played this game to begin with.

Julius Peppers is a great comparison, especially because he’s a guy the Packers joyfully employ.

He’ll be 36 next month and although he isn’t as old as Woodson, as a defensive end and outside linebacker, he’s taken much more punishment.

The point is, you don’t employ 36-year-old defensive ends in the NFL. Unless that defensive end is a freak of nature like Julius Peppers.

So the Packers’ solution with Peppers, who obviously still makes plays from time to time, was to reduce his snaps.

Unfortunately for us and for Woodson, their idiotic solution for Charles was just to tell him to get the hell out of town.

Packers’ Next Free Agent Target Not Nearly As Exciting

Packers' Next Free Agent Target Not Nearly As Exciting