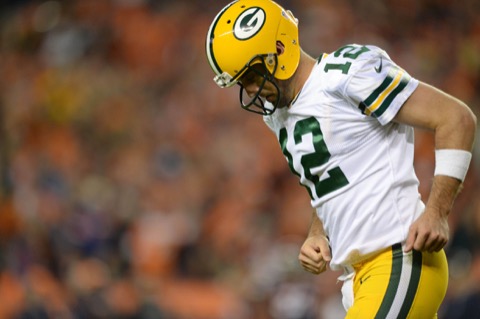 Is Green Bay Packers quarterback Aaron Rodgers having a bad season? Well, not if his name were Teddy Bridgewater.

But yes, Rodgers is having a bad season. The worst of his career, in fact.

And there can really be no debate about it.

If you’re looking at those numbers in a vacuum, they look pretty decent. When you compare apples to apples — Rodgers to Rodgers — they don’t look so decent anymore.

Rodgers’ lowest yardage total in a non-injury season was 3,922 in 2010, when he played 15 games. So Rodgers would need 16 games and have to throw for 392 yards on Sunday to match that total.

The completion percentage will be the lowest of Rodgers’ career. His previous career low as a starter was 63.6 in 2008, which was his first year as a starter. That’s the only other season in his career he’s connected on less than 64 percent of his passes. This season, he’s well below that mark and well below his previous career-worst.

The 6.7 per pass is a similar number. The previous career low was 7.5, again in 2008. This will mark just the third time in Rodgers’ career as a starter that he’s been below 8 yards per pass. Obviously, it’s the first time he’ll be below 7.

The 93.7 rating would also be a career low. However, Rodgers can change that with a good game on Sunday. His lowest rating to date was 93.8, which also came in 2008. This will be just the second time Rodgers’ has had a QB rating below 100.

That paints a pretty dark picture, but don’t worry. It gets darker when you compare Rodgers with the rest of the league.

Rodgers’ passing yardage total has him ranked 17th in the league, behind guys like Blake Bortles, Ryan Tannehill, Ryan Fitzpatrick and Jameis Winston.

You know what that is right there, folks?