by Shawn
in Uncategorized
95 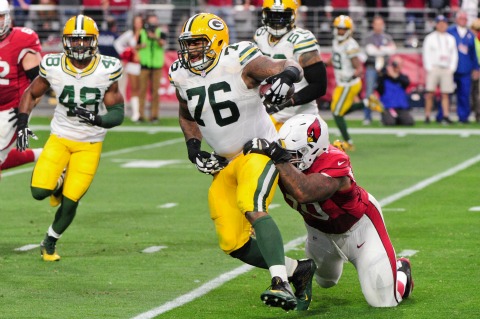 The Green Bay Packers traveled down to Arizona to continue a familiar trend this season. When the Packers travel to play a team considered to be in the NFL elite, they get pummeled in convincing fashion.

This game was as ugly as the score, with the Packers being both embarrassed and humbled on national TV. As we’ve seen in other games this season, the Packers offense was completely outclassed by the Arizona defense. Even during a brief moment of hope after Mike Daniels stepped in front of a Carson Palmer screen pass to set up the Packers offense at the Cardinals’ 15, the Packers were no threat.

Not only did the Cardinals turn away that threat when an Aaron Rodgers’ wing-and-a-prayer pass for James Jones was intercepted in the end zone, but Palmer and the Cardinals then tore through the Packers’ zone before half to get out to a 17-0 lead.

The second half would amazingly be even worse. As it turns out, this game was over when left tackle David Bakhtiari was ruled out on Saturday.

I have been insisting since the preseason that Don Barclay is not a tackle, and yet, Mike McCarthy and Ted Thompson apparently remain unconvinced.

Amazingly, instead of switching Bryan Bulaga over to the left side, which would have allowed Barclay to play the less demanding right side, the Packers felt Barclay was up for the task at left tackle.

A statue of Forrest Gregg would have blocked better than Barclay today. Against perhaps the most blitz-happy defense in the league, the disaster went from Defcon 2 to Defcon 1 when Bryan Bulaga got a booboo on his knee and limped off the field.

That left the Packers with zero offensive tackles on the field instead of the one they played the first half with. Sure, Josh Walker came onto the field to play the right side, but all you have to say about Walker is that he is behind Don Barclay on the depth chart. Consider that and be dismayed.

The result was NINE sacks of Packers quarterbacks for a staggering loss of 78 yards. Throw in around half a dozen holding calls, many declined because they came on sacks, and you have well over a hundred yards lost on sacks. That is a pretty rough mark in the red when you have been running an offense barely in the black for the past two months.

Oh, and did I mention, a third of those sacks resulted in fumbles, two of which went directly into the hands of Cardinals defenders and were promptly taken to the house. So, in another exciting stat for the Pack, the Arizona defense outscored the Packers offense 14-8.

Some thought that the Packers might have a chance to both stay in the game and keep their quarterback upright by running the football. Mike McCarthy appeared to give that about two seconds thought.

After Eddie Lacy bulled his way for a first down on the second possession of the game for the Packers, MM promptly replaced Lacy with James Starks. After a Packers’ punt ended that series, of course, the Packers would throw the ball on the next 14 of 16 downs, or try to at least.

That and the score in the second half would open the proverbial flood gates.

The Cardinals would sense blood in the water and unleash the hounds for the remainder of the game. The Packers looked inept or lost on offense while the defense played valiantly at times, but ultimately gave up too many big plays to stem to the tide. The result was a complete ass-whooping that left no question that the Packers have no business being considered among the best teams in the league.

The Packers offense is worse than without direction at this point. It is hopeless.

MM and Rodgers have found no way to free up Randall Cobb, the one playmaker they have. They have been unable or unwilling to commit to the running game, and Aaron Rodgers has been inaccurate when his receivers have needed him to be more accurate than ever.

And ALL THAT is assuming the offensive tackles can come back healthy enough to play.

The defense is decent against the pass, even with two safeties who aren’t making enough plays. Get Sam Shields back to go with Damarious Randall and Quinten Rollins and you’ve got something.

However, the run defense is still a weakness. With Clay Matthews being slowed by injury or exhaustion, I don’t know what, the Packers’ old issues at inside linebacker have reappeared. In another odd choice, the Packers chose to rush an ineffective Matthews and leave Jake Ryan to cover backs out of the backfield.

As Iron Man once said, “Not a good plan.”

Ironically, even as the Packers were taken behind the woodshed and relieved of any chance at the No. 2 seed they obviously have no business competing for, the Seattle Seahawks lost at home to the Rams. In doing so, they removed the No. 6 seed as an option and guaranteed the Packers will get no worse than the No. 5 seed in the playoffs.

Yes, it hardly seems to matter at this point, but there is that.