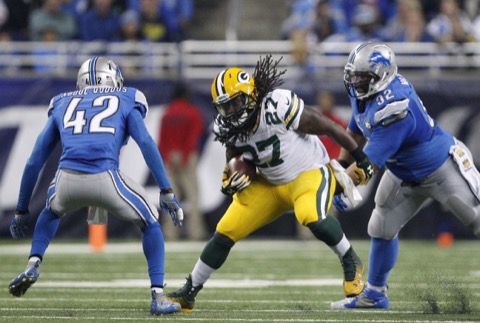 The reason for running back Eddie Lacy’s lack of involvement in the Green Bay Packers’ win over the Detroit Lions has come to light.

He was being punished because he missed curfew on Wednesday night. Also punished for the same offense: running back Alonzo Harris, who got the much more severe punishment of losing his spot on the roster.

He was out on the town screwing around and Mike McCarthy felt like he needed to send a message.

“It’s something that we handled internally, and that was the outcome,” McCarthy said on Friday.

Without Lacy, the Packers running game was pretty much nonexistent. They managed just 67 yards against the Lions and their leading rusher was Aaron Rodgers, with 27 of those yards.

We get it, though.

Both McCarthy and Rodgers have been harping on preparation — or the persistent lack thereof — for what seems like a while now. This would certainly fall into that category.

“He needs to build off his preparation,” McCarthy said. “He’s put up some yards in the prior games, but he can be better. We need to be better as a team, frankly. I discussed this in our team meeting. There’s a lot more to give. The fine details are not where we want them to be. There’s a formula for us to get it there. That was made clear to our players and with the expectations and the commitment that we’ve made to each other, and we’ve got to do a better job. We’re not clicking for four quarters in all three areas, and that’s what we’re working for.”

So, how about you pull your shit together, Ed?