by Monty McMahon
in Uncategorized
50 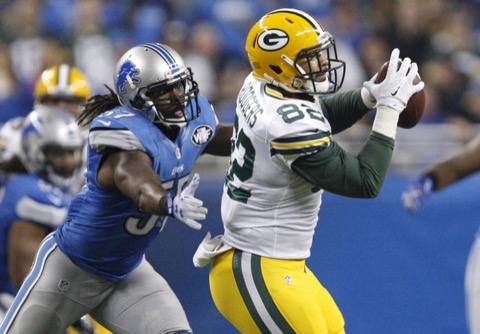 The Green Bay Packers were, for all intents and purposes, going to walk out of Detroit with their fifth loss of the season and second of the year to the Lions.

Down 23-20, the Packers got a lucky facemask call on what would have been the last play of the game. That allowed them one more play with no time on the clock, which gave Aaron Rodgers one desperation heave to the end zone.

And that’s all the Packers needed on this night.

Rodgers’ bomb was pulled in by a leaping Richard Rodgers for the 27-20 win.

It wasn’t pretty, but the Packers were in desperate need of a win and they got an improbable one on this night.

On this night, he wasn’t just the hero, but pretty much the Packers’ entire offense. DickRodge hauled in eight balls for 162 yards and that touchdown.

That performance came on a night when no other Packers receiver made any kind of impact. The team’s second-leading receiver was running back James Starks, who caught five for 45.

To put it mildly, the Packers offense was once again pathetic minus our favorite whipping boy, Richard Rodgers. No other receiving threats and no running game to speak of.

To be fair, the Packers played most of the game with only two-fifths of their starting offensive line intact. The right side, Bryan Bulaga and T.J. Lang, were both inactive and center Corey Linsley left after re-injuring his ankle.

Again, the Packers defense did their part.

After staking the Lions to a 20-0 lead, the defense buckled down and it started with Julius Peppers’ strip of Matthew Stafford after the Packers’ first score.

That led to their second moments later and the Packers had life, with the score at 20-14.

That momentary hope soon turned to here we go again. It most certainly looked like the Packers were going to have a chance to win at the end, but they were obviously going to fall short.

And then they didn’t.

Things still don’t look too rosy, but they look good for this evening, at least.