Where Obama Compares Himself to Aaron Rodgers 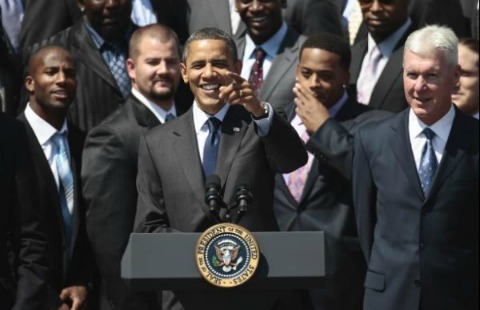 Bill Simmons interviewed Barack Obama for GQ and it was more focused on politics than sports, but there was some talk of sports.

Particularly interesting, at least to us, was when Obama — who’s a noted Chicago Bears fan — compared himself to Green Bay Packers quarterback Aaron Rodgers.

Or maybe [Aaron] Rodgers in the pocket, in the sense of you can’t be distracted by what’s around you, you’ve got to be looking downfield. And I think that’s a quality that I have—not getting flustered in what’s around me. So there was never a point, even early on—even in the first six months, where we weren’t sure whether we were going to dip into another Great Depression, we weren’t sure whether the steps we were taking on rescuing the auto industry or stabilizing the financial system were going to work—there weren’t moments where I thought, “Sheesh, feels like we’re in over our head.”

Funny. Obama must not be watching the Packers this year.

The composure and unflappable nature he notes there hasn’t been on display much from Rodgers this year.

Of course, we know Obama appreciates Rodgers’ game. When the Packers were at the White House in 2011, Obama said he wished Rodgers played for the Bears.