That Hoodie Nonsense is Catching On 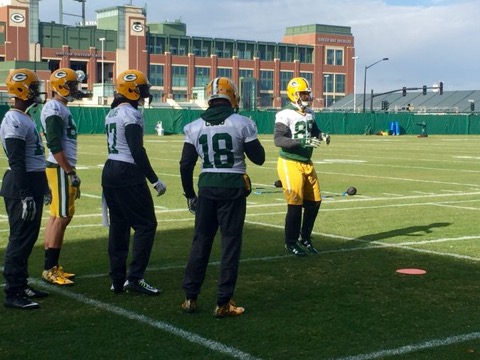 The Green Bay Packers clown prince, James Jones, has inspired a new style — wearing a hoodie under your jersey.

When the Packers showed up at practice on Tuesday, both Randall Cobb and Davante Adams joined Jones in the hoodie club.

Oh, wait… no. Mock turtlenecks are fucking lame. Come to think of it, we’re more surprised that someone hasn’t pulled Jones aside by now and said something like, “Uh… hey, James. Maybe think about ditching the turtleneck. Those went out of style in the 80s.”

Anyway, we’ll be interested to see if Cobb or Adams actually shows up for the game on Thursday with a hoodie under their jersey like Jones did on Sunday.

One interesting thing to note in that image is who isn’t wearing a hoodie (or much else, for that matter).

Must be why the Packers refuse to put him in the game.

Just doesn’t fit in. Isn’t one of the guys. Not in the hoodie club.