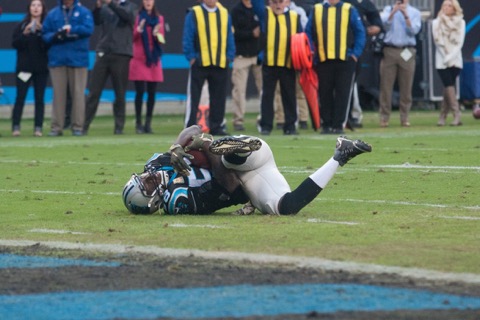 The Green Bay Packers fast and furious comeback at Carolina fell short. It fell short on a fourth-down play inside the Panthers’ 5-yard line when Packers quarterback Aaron Rodgers lofted up a duck that was intercepted by Panthers linebacker Thomas Davis.

The play was an atypical one for Rodgers and, although he had no explanation for it, he said there was good reason for it.

“I had the easy opportunity there for a pitch-and-catch touchdown but I got scared by something,” Rodgers said. “I can’t explain it. It was a mistake by myself. I will definitely be thinking about that one on the ride home, but we have to move on tomorrow and get ready for this divisional stretch.

“The last play is very disappointing.”

It seems odd that Rodgers would get scared. This is a guy who is known for keeping his composure.

On the other hand, the Packers offensive line play was complete pig shit on Sunday. It’s no wonder Rodgers was hearing footsteps or whatever it was that rattled him on that play.

He had a clean pocket on very few plays, on Sunday.

We’re not going to put this game on Rodgers either. It is, however, nice to hear him accept some responsibility for a change.